A church in the countryside

The bell tower of Augustana Lutheran Church in Andover, Illinois, rises from the green fields and roadways of western Illinois.

Inside is the 2,471-pound metal bell, shipped by railway from Ohio and installed in 1881.

Don Norberg, church custodian, rings the bell every Sunday – 9 a.m. in the summer, 10:30 a.m. during the school year.

“I look for the bell tower three or four miles away. You know you’re coming to worship when you hear that bell,” said Steve Pressly, a St. Paul person who is serving as interim lay minister at Augustana. “Think of how many years that bell has called people from all over the countryside.”

Augustana also is one of countless rural parishes in the Evangelical Lutheran Church in America searching for a permanent pastor to come lead.

That’s where Steve comes in.

The congregation was established in the mid-1850s (see sidebar about Jenny Lind Chapel). The church grew in membership to such an extent that within less than a decade a new structure was planned nearby, seating 1,000 worshippers.

Every man of the congregation was to donate his services to brick making – there are a half-million bricks in the church. The church is 125 feet long, 60 feet wide, and the cross on the spire is 136 feet high.

The roof is composed of eight rafters weighing 5,000 pounds each, making an aggregate of 20 tons in weight in rafters alone.

The church still contains its original pews, though some have been removed and the others spaced further apart. The church now seats 600. 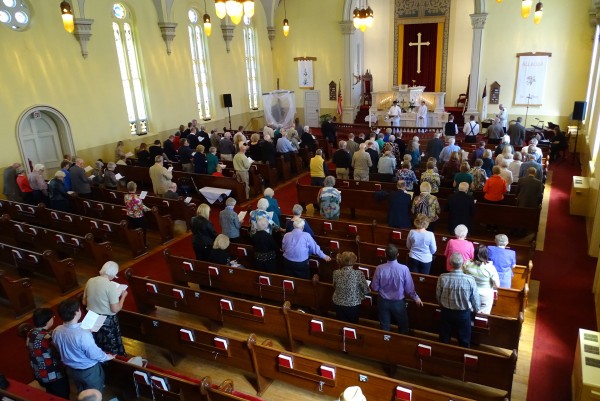 Today, as the only church in the village, Augustana serves as a community church for Andover and the surrounding area. In April, the congregation’s pastor took a call to a parish in Wisconsin.

The synod asked a retired pastor and Steve to share the duties of shepherding the church until a new pastor could be found.

Steve, who is president of Wheelan-Pressly Funeral Homes, recently completed the Diakonia program through the Northern Illinois Synod. He is not ordained, but that training allowed the synod to appoint him to specifically serve Augustana Church, on an interim basis, just as a pastor would.

That means Steve makes hospital visits, checks in with people who are unable to leave their homes, spends time with members who are battling cancer. It also means he leads worship – albeit without a stole that signifies a person is ordained. 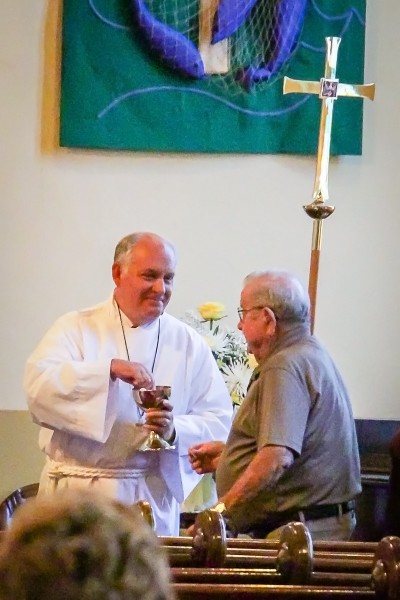 “I get goosebumps consecrating the elements. I can almost feel it in my toes,” he said. “I love worship. I’ve loved worship since I was a child.”

On this particular Sunday after worship, the youth group gave a presentation in the church hall about their trip to Detroit for the National Youth Gathering. The crowd munched on fruit, pastries, cookies, and other treats. Families at Augustana sign up to bring treats on different Sundays.

The conversation at tables is lively – talking about when the next rain will come, recent vacations, a neighbor who is going through a tough time and needs a supper taken to them, and how the kids are doing in school.

Steve mentions his then-upcoming trip to Sweden. Steve’s roots, like the church, are in Sweden. He and his wife, Cindy, just returned from a trip to the country, where they visited family and important family places.

“There’s just something about this place,” Steve said of Augustana. “The people here have been absolutely wonderful. It’s a comfortable place to be.”