A gift for education

Chris Gibney had an idea – to set up a college scholarship at Pleasant Valley High School in honor of his father- and mother-in-law. He mentioned it out loud to one other person. “The next morning my phone rang and I was off to the races.”

“Pleasant Valley has an awesome program in place, where they try to give as many graduating students as they can, a $1,000 scholarship,” Chris said. “It is viewed as an investment into that student’s future.”

The school district’s foundation gives approximately 80 scholarships a year. The goal is to one day provide a scholarship for every deserving graduating senior. The Ted and Carole Minnick Scholarship is now one of those awards.

Ted Minnick was the athletic director at PV for 19 years, Chris said. “He spent his entire career in education and was instrumental in many changes, policies, and new facilities that benefited a lot of people.” One of those efforts included the formation and growth of the Pleasant Valley Foundation.

“For 20 years I have heard, “your Ted Minnick’s son-in-law?” Chris said, “and the conversation goes from there…always nice. He is one-of-a-kind, someone I feel fortunate to know and have grown up around in my 25 years of marriage to Martee.”

Two of Chris and Martee’s three children received a scholarship from the foundation in the past. One night, Chris mentioned to retired PV Superintendent Dale Barber how appreciative he was for that. Dale was Ted’s boss.

“I mentioned, we need to set one of these up for Ted,” Chris said. The next morning, the quest to raise $10,000 to fund the scholarship began (with the help of Dale Barber and current Superintendent Jim Spelhaug). “It took us six months, but we pulled it off, and I kept it a secret from my wife and in-laws. We named it The Ted and Carole Minnick Scholarship because my mother-in-law is just as important as my father-in-law, as she was very instrumental in helping him at PV and raising a family. His hours were long, and she did a heck of a job.”

The purpose of the scholarship is to provide financial support for a graduating PV senior who plans to pursue a career in athletic administration, sports wellness, physical therapy, sports medicine, or athletic training. “The scholarship is set up to award a student $1,000 a year in the Minnicks’ name for a long time,” Chris said.

The new scholarship was announced at a foundation event in December, with the Gibneys and the Minnicks there. 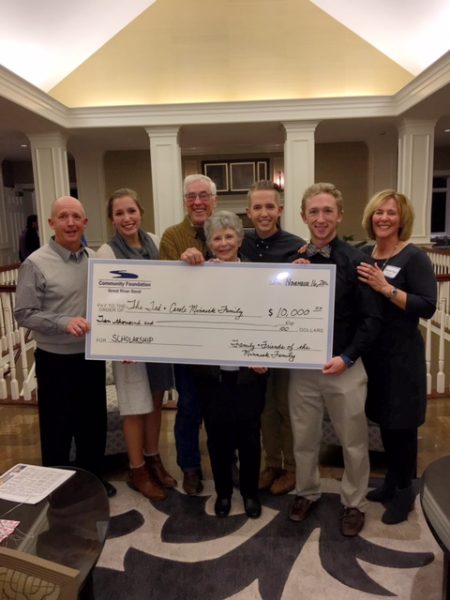 2 Comments on “A gift for education”