David Crowe and Jason Mahn have a lot in common. They are fellow Minnesotans, and neither of them can shake their interest in Lutheran religious questions.

In January at St. Paul, they will co-teach a three-week Sunday morning learning session – Entanglements of Freedom, Sin, Grace, and Conscience – in the Chapel. The discussions will be on Jan. 11, 18, and 25.

“We’re both really curious about what it means to understand Christian faith through Luther’s insights, and the insights of the tradition he sparked,” said Dave, who is on faculty with Jason at Augustana College. 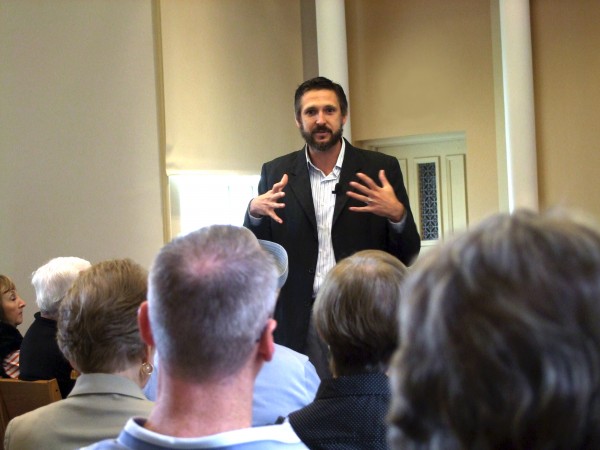 “We have taught courses together, and find that we love the same writers and same books. We are both really interested in interfaith ideas, in finding ways for people of different religions to like and respect and listen to each other.”

And interestingly enough, they have both written books about the Lutheran existentialist theologian Soren Kierkegaard.

The questions Jason raises in his book, Fortunate Fallibility: Kierkegaard and the Power of Sin, will be the focus for that first week.

For more than 1,500 years, the claim that Adam’s fall might be considered “fortunate” has been Christianity’s most controversial and difficult idea.

While keepers of the Easter vigil in the fifth century (and later John Milton) praised sin only as a backhanded witness to the ineffability of redemption, modern speculative theodicy came to understand all evil as comprehensible, historically productive, and therefore fortunate, while the romantic poets credited transgression with bolstering individual creativity and spirit.

Dave’s book, Cosmic Defiance: Updike’s Kierkegaard and the Maples Stories is about the possibility that, through faith, God might help to guide our consciences.

The second week, Jan. 18, will feature Dave leading a discussion on sinful vs. loving conscience.

The third session, Jan. 25, will be an interactive discussion, Dave said.

“Kierkegaard and Updike both have some very challenging things to say about the Church and about love,” Dave said. “They think the Church has become too closely tied to rules and traditions and prohibitions. We need to learn how to love.”

He continued: “Unfortunately, most of Updike’s stories help us to see the crying need for love in the world by illustrating lust, greed, selfishness, and neglect of the people we are to love – especially our children.

I will share parts of some of his stories in order to get at the idea of perfect freedom, through faith, to love.”