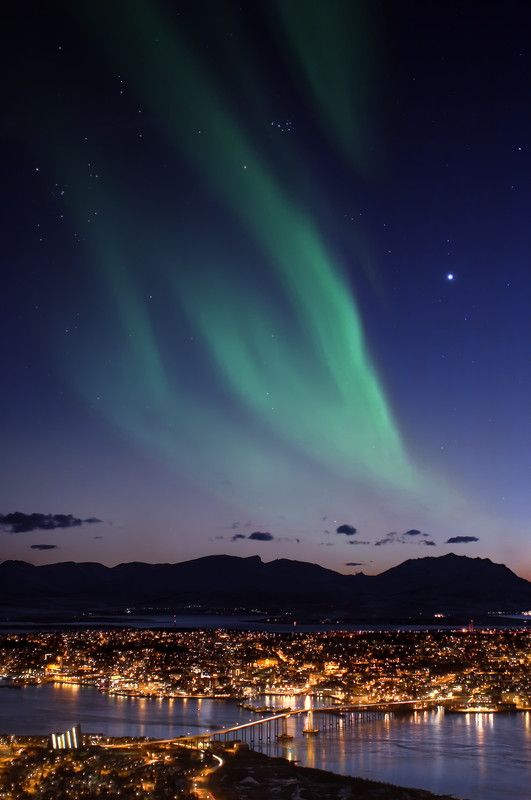 We stood in icy snowbanks up to our knees, teeth chattering, staring up into the cloudy sky above us. We stomped our feet to warm up and stood some more, but there was no break in the clouds. After an hour, we got back on the bus and drove further north to the border of Finland. More snow. More standing. More clouds.

At midnight our guide called off our chase. With resignation and disappointment, we got back on the bus for the three hour bus ride back to TromsØ, having failed to achieve our goal of seeing the aurora borealis, commonly known as the Northern Lights.

It was 2014 and my husband, Dave Crowe, and I were traveling in Norway with 18 Augustana College students. We had many adventures like dog sledding and boating down a fjord with hundreds of waterfalls on either side of the steep mountain sides, but no Northern lights.

In 2016, we went back to TromsØ with 18 more students and our daughter, Emily. Once again we dressed in our warmest layers and rode the bus out into the wilderness, hoping to get a glimpse of the Northern lights, and once again, after many hours and chasing after small breaks in the clouds, we came back to TromsØ disappointed.

The next night in TromsØ was our last night before flying to Oslo. Dave and Emily and I opted to eat dinner at a place near the end of the bridge in the picture above, down by the waterfront, which has very fresh seafood and a lovely view of the city lights on the water. After eating, even though it was cold, we decided to walk along the water’s edge as a long route back to our hotel.

As we walked and talked, I happened to look up at the clear, starry sky and saw an odd flicker. I stopped walking. Emily and Dave stopped walking and looked up also. The flicker happened again. Then again and then it stayed a little longer and suddenly we all three realized that we were seeing the Northern lights! We stepped into a dark street to avoid the city light and stood in the snow for 30 minutes, faces turned to the sky, watching the Northern lights dance and flicker before us.

We were so amazed at the beauty and so astounded at our luck that we could barely speak. I teared up with overwhelming joy. We had spent hours chasing after the lights on two separate trips and just when we had given up all hope, the clouds had lifted and there they were.

They weren’t the most spectacular purple and pink and green display that you often see in photographs. They were very much like the picture you see here, more subtle, just green, but to us, just as amazing.
Of course the lights had been there all along, just covered by clouds so we couldn’t see them.

Advent is a great time for us to remember that God is always there too, even when we might feel alone or unhappy and that we can’t see God in our lives. God, the creator of the Northern lights. God, the light of the world. God, the eternal light who shines in the darkness.

Katie Hanson is a professor at Augustana College where she teaches literature, writing, and future teachers. She loves to read and walk her 12-year-old yellow Labrador, Sandi.