Away in a Manger

Made from banana fiber – the tree-like stem of the banana tree – the figures of Donna Granneman’s favorite nativity scene are intricately created by hand, each with its own humble story to tell.

The baby in the crib.

The mother and her soon-to-be husband.

The shepherds with staffs and wise men with gifts.

The nativity, purchased in Tanzania when Donna traveled there with her 12-year-old grandson, was carved by a refugee from the Democratic Republic of the Congo. As soon as he purchased the nativity with borrowed money, her grandson took it back to their hut and took out each piece to carefully examine them. 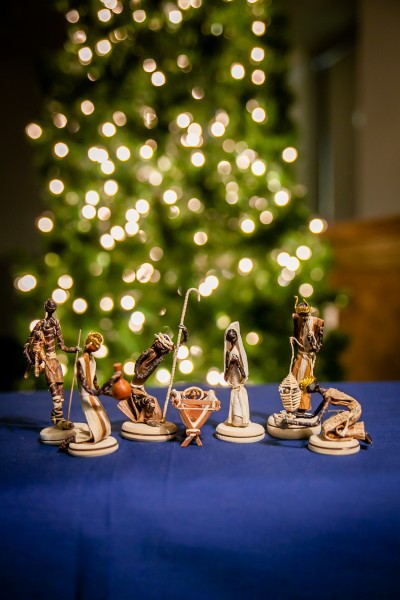 It’s one of a few dozen nativities Donna displays in her home during Christmas. Each is beautifully different – reflective of the culture or place from which it came.

“It’s a big world, a wonderful place,” she said. “Each of these nativities take on characteristics of the culture from which they came.”

St. Francis of Assisi is credited with creating the first nativity in 1223 at Greccio, Italy. The scene is described by St. Bonaventure in his Life of Saint Francis of Assisi, written around 1260. Staged in a cave, it was a living scene with humans and animals cast in Biblical roles.

Now three years before his death it befell that he was minded, at the town of Greccio, to celebrate the memory of the Birth of the Child Jesus, with all the added solemnity that he might, for the kindling of devotion. That this might not seem an innovation, he sought and obtained license from the Supreme Pontiff, and then made ready a manger, and bade hay, together with an ox and an ass, be brought unto the spot.

The Brethren were called together, the folk assembled, the wood echoed with their voices, and that august night was made radiant and solemn with many bright lights, and with tuneful and sonorous praises. The man of God, filled with tender love, stood before the manger, bathed in tears, and overflowing with joy. Solemn Masses were celebrated over the manger, Francis, the Levite of Christ, chanting the Holy Gospel. Then he preached unto the folk standing round of the Birth of the King in poverty, calling Him, when he wished to name Him, the Child of Bethlehem, by reason of his tender love for Him.

The concept of the nativity scene then spread far and wide – live nativities and static ones, each with different artistic traits and characters. Nativities began to take on the culture and practices of regions – a practice that remains today.

From Ireland to Americana

Nativities have always been a part of Christmas for Donna.

When her children were small, a nativity could be found under the Christmas tree (at times, a lamb would make its way to under the couch or a shepherd under the coffee table). That nativity set is now with her son in Salt Lake City.

Today, she and husband Wayne keep the nativities carefully boxed up for most of the year. They bring them out about this time, and display them through January.

Some are as small as the palm of one’s hand. One is expansive and takes up the length of a long dining room cabinet. They are horizontal, vertical, glass, plastic, wood, silver, and even cardboard (one of Donna’s favorites, a self-contained nativity box, likely from the 1940s or ‘50s). They come from Africa, South America, Europe, and all over America.

These pieces of art, of sculpture, originate from places as far away as an international gift shop in Tanzania and as close as a Hallmark store. Wayne sneaks into St. Paul’s Book Corner and purchases some, too. They are bright and colorful, or all one or two colors – pearly white, shades of brown, pewter, black and gray.

Each nativity has an individual story of its creation – while telling the story of God’s creation in Jesus. That’s what Donna, who was a teacher and a librarian, loves the most about them.

“It is a universal story,” she said of the story of Jesus’ birth. “It is ours, and ours is theirs.”