Early each morning, Tom Lahl rises to do chores at his hog-feeding operation out by Blue Grass. He spends about an hour to an hour-and-a-half running feed on the place where he’s lived for much of his life.

Tom and his wife, Joan, have also spent time travelling throughout their lives. On their trips, they always loved to visit coffee shops. In 2011, Tom bought a roaster off of the online auction service eBay, and a coffee business was born. Today, he and his son Charlie own and operate Dead Poet’s Espresso in downtown Moline.

Variety is the spice of life, they say. Tom lives by that idea. What an interesting mix of businesses, others will sometimes note. “People seem to be interested in that,” Tom said with a smile. “It’s a different combination.” He will be the presenter Saturday morning, March 12, at 7:30 a.m. for the March meeting of Lutheran Men in Mission at St. Paul. 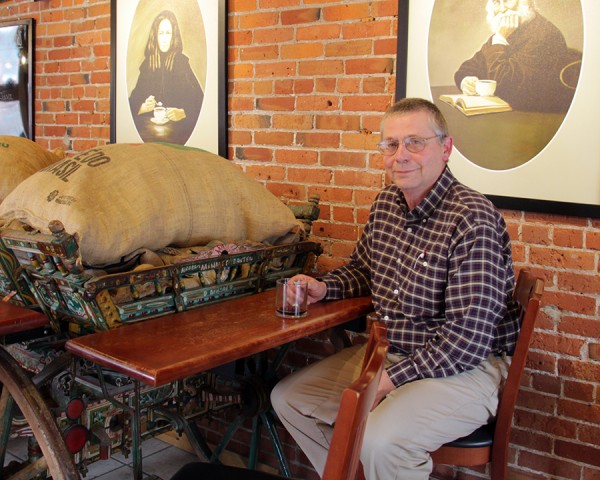 Tom’s farming operation is what’s known as contract feeding. Hogs come to him when they are about 70 pounds a piece. He finishes raising them to market weight – which takes about four months. Chores are done no matter the weather outside.

His coffee business began with the roaster. Tom and a family member learned how to run the roaster, which is located on the farm. “We burned quite a few beans, but learned how to operate the roaster.” By the fall of 2011, they had decent success in selling to friends and family members. It was about that time that Tom noticed a for sale sign in the window of Dead Poet’s Espresso. At first he asked if the owners would be interested in buying his beans. “But I really loved the shop,” Tom said, so he inquired about purchasing it.

They took over in June 2012. Son Charlie now partners with his dad. They continue to roast their own beans, and offer food and entertainment as well. Hours are Monday-Saturday, 6:30 a.m.-5 p.m.

“I like to be here,” Tom said. He is a fan of the dark roast, sometimes with half decaf mixed in. “It’s the conversation. I like to visit with people. There’s a wide variety here of backgrounds.”

One comment on “Beans and bacon: Building businesses with delight & dedication”