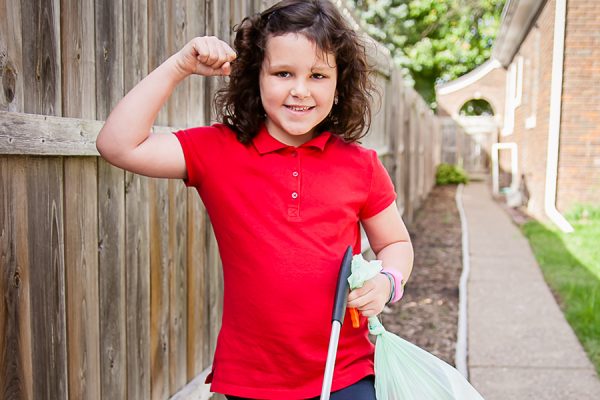 In August, when Meyer Wikoff walked from her home to a kindergarten orientation at All Saints Catholic School in Davenport, she noticed trash along her path.

“I told my moms, ‘can we pick this up?’” said Meyer, who is the daughter of Haley and Erin Wikoff.

On her first clean-up Friday, she woke up 15 minutes early. In the two short blocks to school, she picked up one pound of trash – and that was just some of what she saw. So Meyer, 6, declared: “I want to clean up one ton of trash from the streets of Davenport.”

And then, with the help of some social media magic, Meyer invited her friends to join in. The #meyermovement was born.

Friends, affectionately known as the trash fairies, equipped Meyer with two picker-uppers and biodegradable trash bags. Friends from Iowa City and St. Louis joined in the movement. Meyer has picked up all sorts of things. She did draw the line at cheeseburgers and cigarette boxes, though. It doesn’t matter which day, though Trash-Day Tuesday does have a nice ring to it.

On the first Saturday of October, Meyer went with her mom, Haley, to collect trash near the old Greatest Grains building in Davenport. They collected 14 pounds of trash in two square blocks in one hour.“We just pick a day and we do it,” she said.

To become a part of Meyer’s efforts, you can email her mom, Haley, at hwikoff@yahoo.com.