Journey to a refugee camp

Crammed into a taxi, then a van, then a bus bumping along the roads of Uganda, Todd Byerly and a friend Yoeza Mnzava, made their way from the airport in the capitol city of Kampala to the Kyaka II refugee settlement. Pronounced Chaka Two, the settlement is about five hours away from the airport. 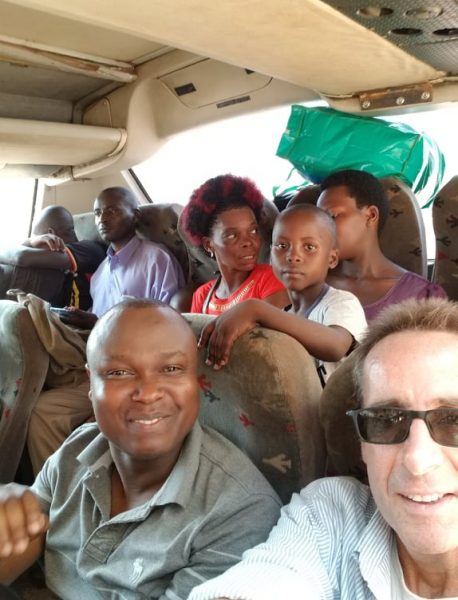 Todd, director of operations for St. Paul, went to meet the family and friends of a family St. Paul people might know – Noela Zamukunda and her six children. St. Paul welcomed them to the U.S. two years ago this month. While in Tanzania with Empower Tanzania, the nonprofit he leads, Todd took a side trip to the resettlement to send greetings from Noela, her kids, and St. Paul – to let Noela’s father, brother, sisters, and extended family know that they are doing OK.

“I wanted to learn more about the place where Noela and kids lived, and to meet her family,” Todd said. “Four of Noela’s kids were born in the camp, and had known only that camp. Being at the camp would give me so much context as I try to understand the life they once had. I felt very committed to visit Noela’s family and to make a connection with them face-to-face.”

Noela’s brother, Buchaguzi, met Todd and Yoeza at the airport for the journey to Kyaka II. Buchaguzi works in one of the settlement’s medical clinics. 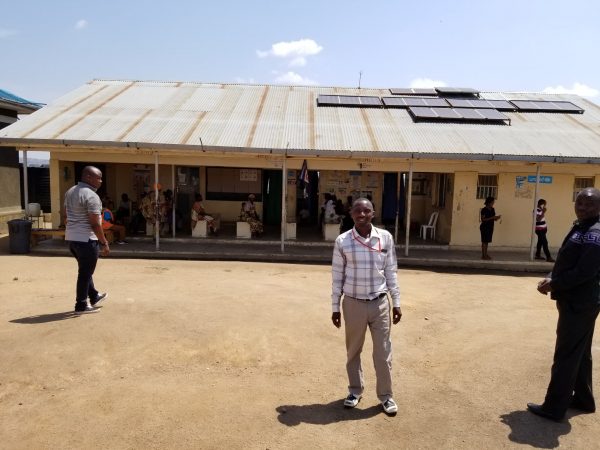 Upon arrival, Todd and Yoeza checked in with resettlement officials. The first stop was to see Noela’s father, who is on the left in this photo, along with Buchaguzi (brother), Noela’s step-mother, Buchaguzi’s wife, as well as nieces and nephews. 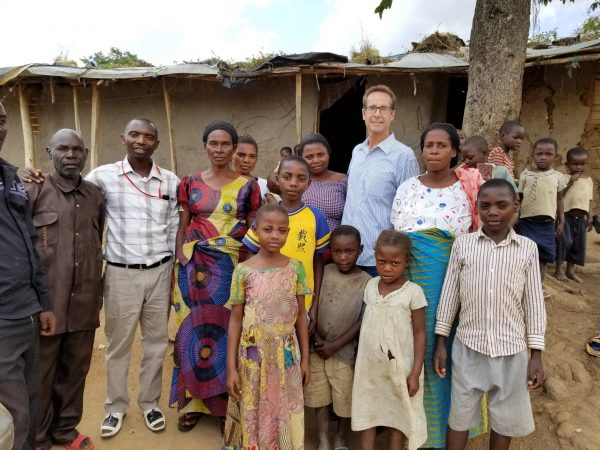 “Noela’s father asked about Jerome, so I showed Babu (grandfather in Swahili) some pictures on my phone of Jerome at Camp Shalom and riding his bike,” he said.

“I visited the church where Noela and the family worshiped. Many women were cultivating in front of the church – probably planting more cassava. They all remember Noela, Charlene (Noela’s oldest daughter), and the family well. The pastor invited me in – we connected well and prayed together. He out-prayed me 100 to one.” 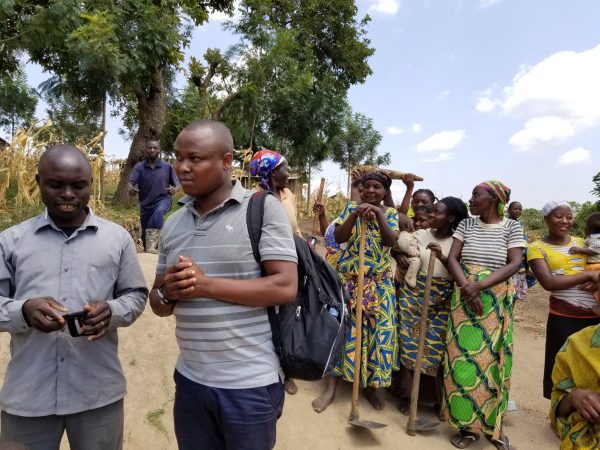 “There seems to be enough water in the camp, at least in Buchaguzi’s neighborhood,” Todd said, noting that food is in very short supply. “I did not see very many outhouses. I did not see chickens – I was told chickens are expensive to raise and they just die all the time. Buchaguzi has a couple goats, and wanted to give me one. I had to turn him down, explaining that there would be no way for me to take a goat out of the country.” 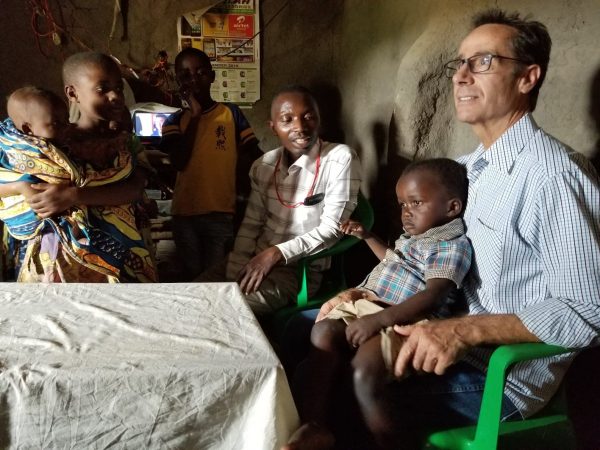 They met one of Noela’s sisters, Shukuru, on the left. 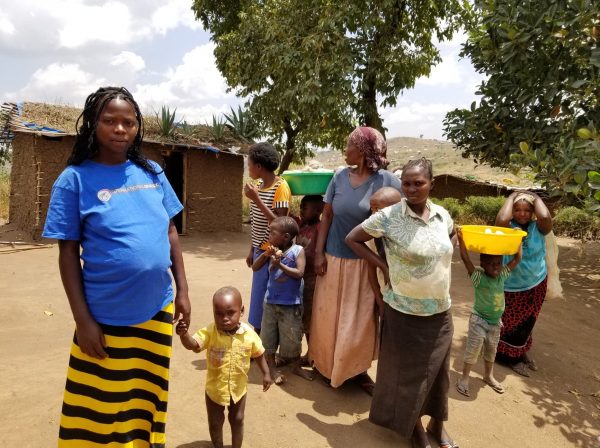 They also met Sifa, another sister of Noela. Sifa recently arrived at Kyaka II from the Congo. It’s been nearly two decades since Noela has seen her sister. She did recently talk with her by phone. 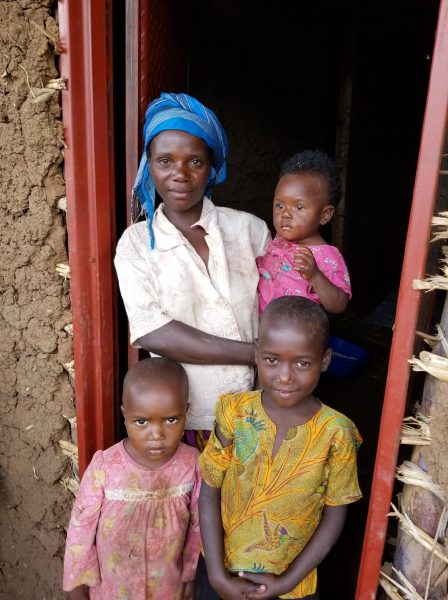 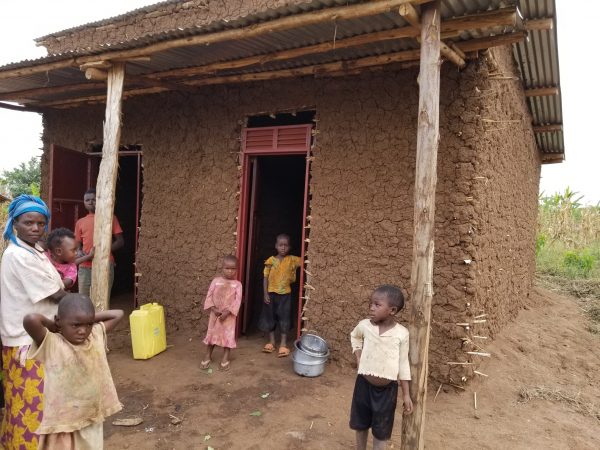 According to the U.N. High Commissioner on Refugees, Kyaka II settlement was established in 2005 to receive the remaining population of Kyaka I following the mass repatriation of Rwandan refugees the same year. After this movement, Kyaka I was closed after 21 years of operations. Renewed violence in the Democratic Republic of Congo (DRC) led to a new refugee influx into Uganda – including a recent surge of arrivals in the past few months. Busloads arrive daily from the DRC, with hundreds of people coming each week.

Here is the receiving center at Kyaka II. Every person who arrives is checked for Ebola and other diseases. 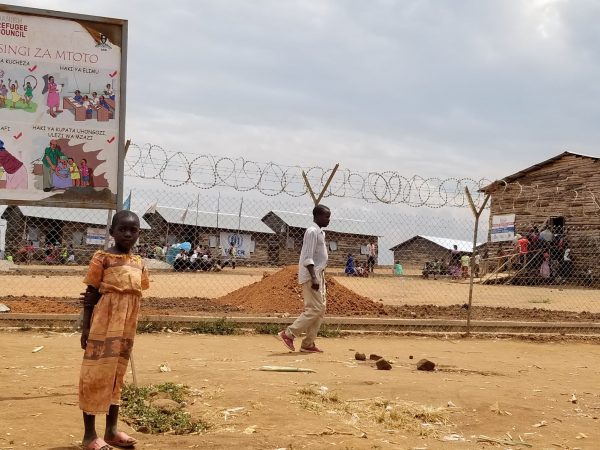 At Kyaka II, according to the U.N.:

– Health services are insufficient to meet the needs of the population. Many health centers in the settlement have a shortage of beds, drugs, and medical personnel.

– The education sector is under-resourced. Refugees reported inadequate teachers, few classrooms, language barriers between students and teachers, and prohibitive secondary school fees. Kyaka II has only one secondary school, which is not sufficient to serve all school-aged refugees. Additionally, there are no opportunities for the youth to enroll in vocational programs due to lack of training institutions, although a new center is under construction.

– Limited access to land and natural resources has the potential to cause tensions among refugees and with host community members.

– Protection concerns mainly root from land allocation, as many refugees reported that the land initially given to them has been reallocated to new arrivals, causing social unrest. Other protection issues include lack of case follow-ups after reporting crimes, and incidences of bribery and corruption while seeking justice. Additionally, access to livelihoods opportunities is limited especially for persons with specific needs and in particular, women and girls. Some members of these vulnerable group may engage in harmful coping mechanisms such as survival sex.

– Because of a lack of vocational training centers, many youth refugees need basic knowledge and skills to engage in various livelihood programs, such as carpentry, hairdressing, mechanics, and tailoring.

– The environmental conditions in Kyaka are conducive for agricultural production. Because the soil and climate are suitable for crop cultivation, refugees are able to grow a variety of crops, which have supplemented food distribution programs as well as created livelihoods for some refugee families.

It is believed that Kyaka II will reach its capacity of 100,000 people this year. Todd saw signs for several relief and development agencies, including the U.N., American Refugee Committee, OXFAM, Save the Children, UNICEF, and the World Food Programme. 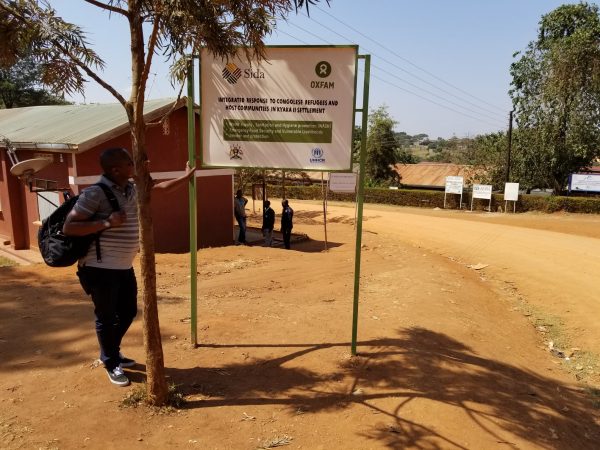 Water in the resettlement comes from wells. This is where Noela’s family got water. 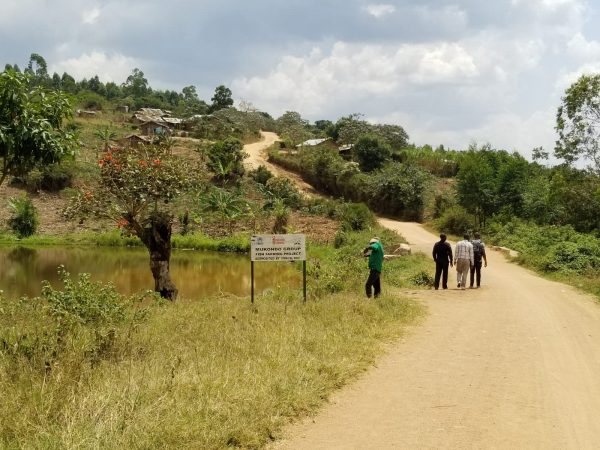 “What I got out of this visit was a not only many great pictures inside of a refugee camp, but connections with a family,” Todd said. “I felt that I represented Noela and the kids, sharing pictures and tidbits of Noela’s life with Buchaguzi and his relatives.

“I hoped to also send a message to Noela and the kids – that I wanted to know them better, and that I would not leave them. I returned with a hand bag full of cloth and dresses that Noela could not put in her one bag on the trip from the camp two years ago to the U.S.

7 Comments on “Journey to a refugee camp”