She and her six children, ages 2-16, had just completed a journey of 8,000 miles – from Kyaka, Uganda, to Rock Island, Illinois. It was 9:30 p.m. A few important pieces of paperwork were signed. A few important lessons about the stove, locking doors, and how to turn off the lights were finished. Plans for the next day were set. The children played with new toys, looked over new books, and ate a few snacks.

And then it was time to settle in, get tucked in, and sleep. 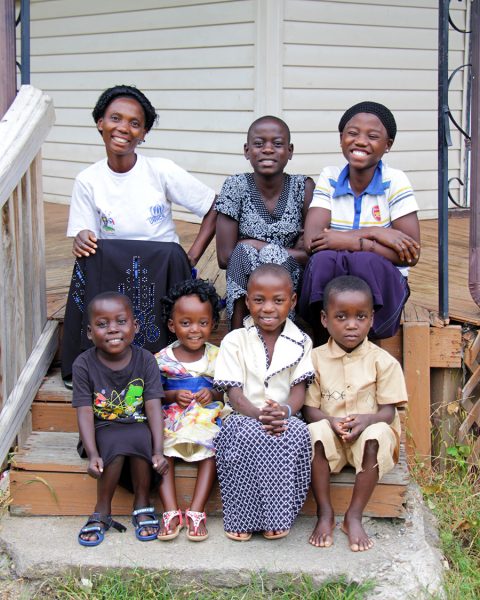 “I am very happy,” Noela said in Swahili as she walked a case worker and translator from World Relief, and volunteers and staff from St. Paul to the door.

Noela and her children are seven of approximately 250 people World Relief will help resettle this year in the Quad Cities. St. Paul will accompany Noela and her family as they work toward self-sufficiency. They come from the Democratic Republic of Congo, after a years-long stay in a refugee settlement in Uganda. The DRC has experienced some of the worst human rights abuse and violence in recent years. It is considered to be one of the most dangerous places on earth for women and girls.

Noela, 34, does not speak English, but her two oldest daughters know some. Charlene is 16. Chantal is 14. Deborah is 9. Jerome is 7. Rebecca is 5. Rehema is 2. Their native languages are Swahili and Kinyarwanda. The three oldest have had some schooling in recent years. Four of the kids have health concerns.

They arrived in the Quad Cities with two suitcases and a handful of backpacks. They all wore winter coats, and Noela wore Rehema wrapped on her back. After greetings and collecting luggage, the family climbed into the St. Paul van for the final leg of their journey.

After a 10-minute ride to Rock Island, they climbed the stairs into their duplex in the Broadway neighborhood, not far from the Centennial Bridge. They made themselves at home, surrounded by furniture and household items that St. Paul people donated. Volunteers set up and scrubbed the two-bedroom duplex in September.

And now, St. Paul people will share their lives with them. Over the next several weeks, St. Paul people will help Noela learn how to grocery shop, drive the family to an assortment of appointments (doctors, social security, school registration), teach them how to ride the bus…all while getting to know our new neighbors. In addition to St. Paul staff, Angie Vaaler and Mollie Hart are heading up the volunteer coordination effort.

Why did this family have to leave their home?

In the DRC, military conflict for the past 15 years has prompted people to flee – conflict that started with Rwandan civil violence and genocide in the 1990s. One of the most significant reasons for the fighting is for control of the DRC’s natural resources, which include rich farmland, precious jewels, and metals.

More than 2.4 million people from the DRC alone have been displaced because of killings, kidnappings, mass rape, and torture. It can be assumed, World Relief leaders say, that refugees from the Congo have experienced or witnessed violence.

Over the next five years, the U.S. expects tens of thousands of refugees from the DRC, many of which will resettle in the Quad Cities, just like the Zamukundas.

On this particular night, Noela and her children were the newest residents of the Quad Cities. Those shoes they wore – tiny sparkly sandals, gray canvas shoes with bright blue laces, high tops with flowers, and flip flops with orange and yellow gems – brought them to a life full of promise and hope.

See photos from the night the family arrived at the Quad City International Airport.