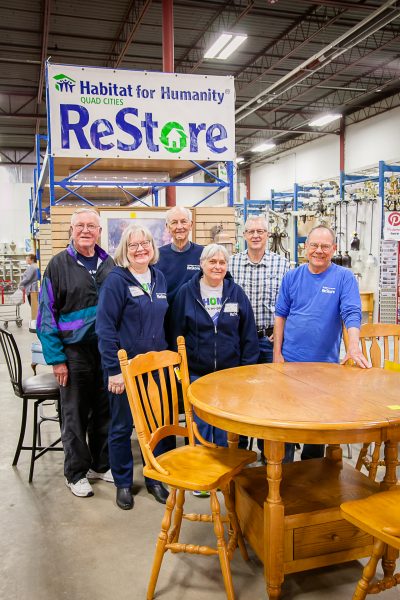 Keith Clifford roamed the aisles at Habitat ReStore in the Quad Cities. He’d come in with gloves on to look for lumber or an item to bring back to life. He’s retired, and his interest in restoration had soared.

Keith stopped in regularly to the Davenport store, which gathers donations of building materials, furniture, and appliances and sells them. An interesting thing started to happen: customers asked him for help. They thought he worked there. The thing is, he was around the place enough that he could usually direct people to find what they needed.

Meanwhile, his wife, Kathy, was a bit worried about whether her dear retired husband was getting enough social interaction. He invited her to come to ReStore with him one time. She witnessed the “I thought you worked here” phenomenon. One suggestion later (“Hey Keith! You should volunteer at ReStore!”), and the rest is history.

Keith is now one of several St. Paul people who volunteer at ReStore.

It all started with a trip to Guatemala. Cindy Kuhn traveled there several years ago with others from her congregation, First Presbyterian in Davenport. After she returned, the wheels started turning in her mind. She wanted to do something meaningful. She had heard of ReStore, second-hand shops that not only keep things out of the landfill but also support the work of Habitat for Humanity. She visited a few, then went with a friend before the board of Habitat to ask: Can we start one of those here?

The board said yes. ReStore Quad Cities opened in 2002. Today, it is a 27,000-square-foot adventure in lots of good things, one of 900 nationwide. An expansion into medical home health equipment boosted its footprint in 2012.

Cindy’s pastor at the time told her that mission starts when a person arrives back home.

“I think he meant that you begin helping others understand what you saw and have experienced…and it might affect the way youthink of others in the world,” she said. “Hedidn’t necessarily mean you need to go outand start a ReStore…but you never know what people might do.”

Jim Keller’s been around since the beginning. His job is in the recycling area. One recent day, he was excited about a huge light fixture that came in. It wasn’t safe to sell as a fixture, but the amount of yellow brass Jim took out of it? About 20 pounds worth – or about $40, money that goes to ReStore. He’s at ReStore two or three mornings a week.

The types of people who shop here are new homeowners, landlords, creative people, handyman-types, woodworkers, owners of old houses, and parents of kids going to college, Jim said. One of the greatest joys for volunteers is matching something very specific to an excited new owner.

Let Belinda Holbrook tell you about the blind hem stitching machine that came in. “Who’s going to buy that?” she wondered. Well – a costume designer for Circa 21 came in, and it was love at first sight. “This is just perfect,” the designer said.

Belinda, who loves all things Habitat, teaches popular faux stained glass classes at ReStore. She’s been on the board and supports families who qualify for Habitat houses. The families, who must put in sweat equity hours, can come work at ReStore to fulfill some of those hours. Putting people to work where their skills match a ReStore need is vital to the success of the operation, Cindy said.

That’s true, Manny Fritz confirmed. “I’m not a very handy guy at all,” he said. “But cash register? I can do that.”

The people who come through the line like to talk about what they’re doing with what they buy. Sometimes, they will return with pictures of how the items are transformed.

For Pat Grimm, putting her talents to use means a couple of things. But most notably, Pat sews sports-themed and patterned bags that fit over walkers for the medical equipment side of the operation. They are really popular.

“This is the friendliest place to volunteer,” she said. “I just enjoy coming here.”

Bob Benson also volunteers on the medical equipment side of ReStore. He and Manny are similar – the building products side is not in his skill set. But for a retired doctor, the medical side is perfect.

“I just love the mission,” he said. “It’s almost like an ortho floor, with walkers and wheelchairs.”

People often come in searching for items that insurance won’t pay for, he noted. Sometimes, he runs into former patients. Every customer who walks in the door has a story. “The people here are great.”

Cindy, the founder, notes that ReStore is a place where everyone is pulling in the same direction. The people who come through the doors, to volunteer and to shop, come from a wide variety of backgrounds. Habitat ReStore will never have pick up stations, she said. “We want people to come in and find treasures.”

“It’s been a really fantastic journey,” Cindy said. Ninety percent of ReStore income goes to Habitat Quad Cities. The remaining 10 percent goes to international projects – such as work in Guatemala. “I get goosebumps every single time I think about that.”