Jeff Zust’s grandfather and great-uncle served in the military during World War I. His grandfather came home, took off his uniform and threw it away. His great-uncle was injured, and spent much of the rest of his life in the hospital. He died of his wounds in 1941.

Jeff’s dad and uncle were Korean War veterans, and his dad was a Vietnam vet as well. At family gatherings, those who served would get together to talk – and no one else was allowed. Only recently, after Jeff returned from serving in Iraq, did his dad starting telling Jeff his stories. 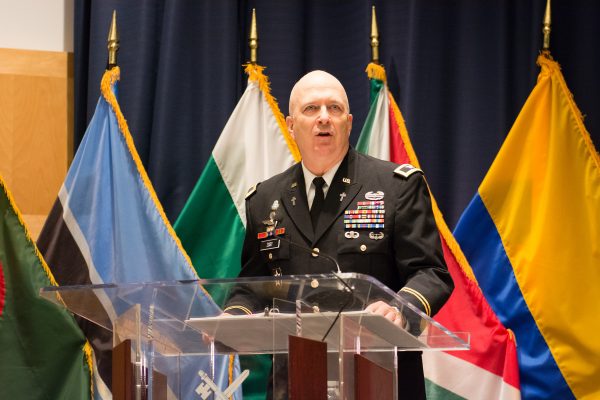 Over time, Jeff became very interested in studying moral injury. He now serves as the chaplain for First Army, which is based at Arsenal Island. He coauthored a book with Duane Larson, pastor and former St. Paul member, called Care for the sorrowing soul: Healing moral injuries from military service and implications for the rest of us.  Jeff’s service has taken him to places like Iraq and Somalia, in intense combat zones with countless casualties.

He will present a two-session Sunday morning learning talk on moral injury – Nov. 18 and Dec. 9, 10:20-11:05 a.m. in the Chapel. Moral injury, he said is a values-based injury. The often-discussed post-traumatic stress disorder is different – it’s a fear-based reaction to something that has happened.

“I’d watch these men do this, watch my dad come home from war, then started experiencing it myself,” he said. “I wondered how are processing this?”

The first session, on Nov. 18, will focus on the hidden injuries that occur from exercising moral agency in combat, specifically in the context of moral development, moral judgement, and moral healing. Oftentimes, soldiers have one second to figure out what’s going on, one second to figure out what to do, one second to do it, then the rest of their lives to live it, Jeff said. The second session, on Dec. 9, will focus on a pastoral response to moral injury. Specifically, how do we talk about healing and rebuild healing narratives.

Jeff uses and example of two soldiers who fought in WWI.

“I went to Washington, D.C. recently and spoke at a WWI seminar. We talked about moral implications from the trenches. What I did is I took some character sketches and showed how their moral injuries played out in their lives. Both had moral issues, but one took a very functional way to create a healing path – C.S. Lewis. One took a destructive path – Adolf Hitler. Both were wounded veterans.”

War extracts a terrible cost upon the character of those who choose to serve.  One price of this service is moral injury. Soldiers assign meaning to their perceptions based upon their worldview and the moral senses that braid their humanity with their vocation. This is what makes them moral actors and what provides a basis for examining how they reason and why they feel the way that they do. Herein lies the means for mitigating and healing their moral injuries. (Care for the sorrowing soul: Healing moral injuries from military service and implications for the rest of us).