On Exhibit at St. Paul: Art by He Qi

Five pieces of vibrant religious art now hang in the Library Commons at St. Paul. Painted by Chinese artist, He Qi, these works tell beloved stories from the Bible using bold colors, geometric shapes, and Chinese motifs. The art display was funded by the Memorial Committee of St. Paul. This fund receives memorial gifts (usually honoring lives or anniversaries) that support special projects or acquisitions outside of the church’s budget. 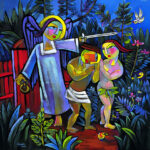 Adam and Eve are expelled from the garden. God’s disappointment over their decision to eat of the forbidden fruit from the tree of knowledge of good and evil in the middle of the garden sends them packing in shame — Eve to be cursed with labor pains and Adam to till the soil. 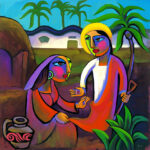 Mary has been weeping in the garden, distraught over the disappearance of Jesus. When the resurrected Christ calls out her name, she realizes that the one she thought was the gardener is actually her Lord. In an attempt to keep him close, she grabs him and holds on. That’s when Jesus says to her, “Do not hold on to me.”

Jesus appears to his disciples John 21:12

The resurrected Christ invites his disciples, who have spent the night fishing on the Sea of Galilee, to “come and have breakfast.” Peter, depicted with paddle in hand, and Jesus’ beloved disciple stand beside the fire that Christ has prepared for them on the beach. 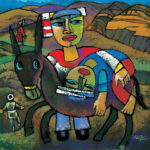 The Good Samaritan shows mercy to a robbery victim who had been attacked on the steep and winding road between Jerusalem and Jericho. After bandaging the man’s wounds, the Samaritan places him on his donkey and takes him to an inn for healing. The priest and Levite, who refused to attend to the victim, can be seen in the distance. 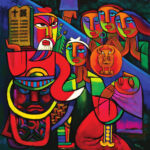 Moses, with Ten Commandments in hand, gets angry with the Israelites for turning to idolatry. As he comes down the mountain from his meeting with God, stone tablets of the commandments in hand, he discovers that the Hebrew people have melted down their gold jewelry and are worshiping a golden calf made from it.

As a teenager, He Qi found Rafael’s Madonna and Child painting in an old magazine. This sparked an interest in Christianity, and he began painting to escape laboring in the fields of China. He went on to study medieval art at the Hamburg Institute of Art in Germany and received his doctorate from the Nanjing Art College in 1993. Qi was the first person from China after the Cultural Revolution to earn a Ph.D. in religious art. Religious art from the Middle Ages has always depicted biblical scenes with European-looking people. This inspired him to paint these stories with a Chinese background and Chinese characters.

He Qi is currently an Artist-in-Residence at Fuller Theological Seminary, CA and a Distinguished Visiting Professor at the Art Institute of RUC (Renmin University of China, Beijing).