Today is my parents’ 49th wedding anniversary. On December 10, 1966, they were married in the small, stark sanctuary of the Baptist church where our family worshiped for decades after that.  It was an old-fashioned wedding in most senses. There was no elaborate reception with dinner and dancing, just a simple cake and punch affair in the church basement. But mom and dad had to wait a good while to get even their cake, because of one new-fangled invention brought to the ceremony by my paternal grandmother: a Super 8 film camera. 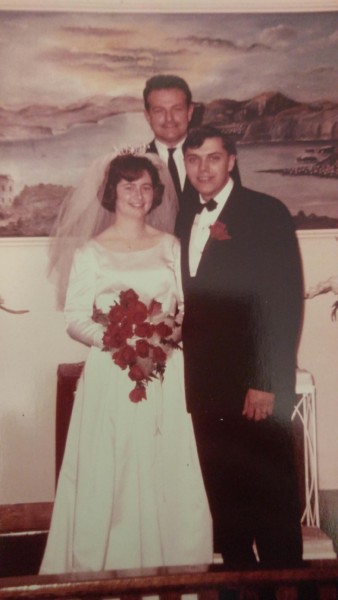 According to my research, Kodak first produced this camera in 1965, so, even though it couldn’t give you a movie with sound (think Clark Griswold watching home movies in the attic), it was high tech to be sure. But if we find tablets and smartphones to be distracting at concerts and weddings today, we can be assured those ubiquitous glowing screens have nothing on the Super 8 when it comes to the power to disrupt. The worst part, my parents assure me, was the light bar attached to the top of the camera. Most everyone in these old home movies is squinting.

It is why mom and dad had to have their wedding twice. Since using the camera during the actual ceremony would’ve been madly distracting, and since my grandmother insisted on preserving the occasion on film, a compromise was necessary. After the wedding was over and all the guests had gone downstairs, the wedding party reenacted the whole thing. I’ve seen the footage of my mom coming up the aisle on the arm of her father (who was chewing gum) surrounded by empty pews. It’s a ridiculous scene. Who ever heard of a rehearsal after the fact?

We might ask the same question when it comes to the season of Advent. Sure, Advent is also about anticipating the return of Christ, but it’s fair to say that’s not the dominant theme in our minds as we approach December 25. Why do we look forward every year to an event that took place 2,000 years ago? Doesn’t Advent just set us up for an incredible let down? After all the build-up and anticipation, does anything really happen or change at Christmas? Are we just pretending in a church full of empty pews?

I don’t think so. The story that we rehearse over and over again in church every year, from Advent to Easter to Pentecost to Reign of Christ, is the story of what God has done and what God is going to do to save the world. Rehearsing the parts that have already happened reminds us of what an incredible story we’re in right now and encourages us to believe that God is doing something now.

I’m sure a few people were a little annoyed by my grandmother and her Super 8 camera 49 years ago today, but I’m glad she persisted. Those squinting eyes and my mom and dad’s smiles have since been transferred to VHS. That means I can see them, too, even though I wasn’t there. And knowing that story helps me to know my own a little better.