Each piece of clothing is marked with a name on the label. All of the cans of bug spray and sunscreen, towels and socks, flashlights and shorts, are packed with love.

Six fourth-grade girls from Davenport schools are going to camp this summer, all expenses paid. They go, thanks to the passion and care of a group of women from the National T.T.T. Society who believe in the power of spending time away in the outdoors. Five of the girls attend Madison Elementary, the neighborhood school that St. Paul partners with. 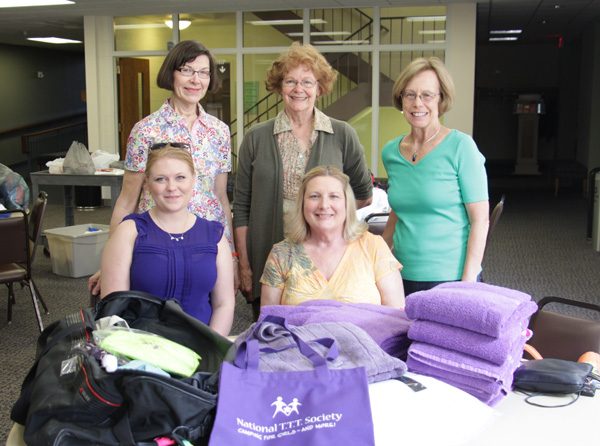 This week, the women of this local chapter of Tri-T (including several St. Paul people), shopped to get the girls ready to experience sacred space and growing faith at Camp Wyoming in Jones County, Iowa. They set up their packing assembly line in the Library Commons.

“Our organization is dedicated to empowering young girls in our community,” said Josie Seymour, a Tri-T member who was once a Tri-T camper herself. “We believe in building them up and being positive role models.”

Tri-T is a 105-year-old national organization, with its roots in Iowa. The organization’s history is a beautiful story of six friends who forged a solution to a problem:

It started with a casual remark. Bess Cook Budde and Gladys Stewart Walters were talking. Bess noted that there were many things for boys to do in Mt. Pleasant, Iowa, but not for girls. It was January 1911. Gladys, a student at Northwestern University, had an English assignment to write answering the question, “What have you received from your work in English that you can carry away with you for use the remainder of your life?”

With Bess’ comment in mind, Gladys envisioned clubs being formed by women in their hometowns, each with the same name and same ideals. The focus would be on service embodied in charity. She believed charity was three-fold: thought, word and deed. She shared the idea with Bess, who liked it immediately. They gathered four friends and met for the first time on June 30, 1911. The T.T.T. Society was born.

Over the years, additional chapters were formed until it became apparent in 1930 that a national organization was needed. In January 1931, the first national convention was held and the name changed to the National T.T.T. Society. Today, more than 4,000 members in 14 states carry on the work of the six founders.

Camp Wyoming is a Christian summer camp that began in 1960. It runs a variety of programs and retreats, including a summer camp for kids. Among its sessions are times for people with special needs, families, and Tri-T campers.

“Children at summer camp gain confidence, independence, and a sense of self-worth,” said Stacie Hoppman, director of programs and marketing at Camp Wyoming, recently wrote in the camp’s blog. “When a child successfully spends the night away from their parents and the comfort that the familiarities of home and their routine offer, they learn a lot about themselves. They learn that they are able to take care of themselves. They are able to manage their own well-being. They can make friends, cook a meal over a fire, work together with their team, and paddle a kayak. They come home understanding more about themselves as an individual.”

And their faith grows, she said.

“Camp takes kids out of their normal environment and puts them right in the center of God’s creation, surrounded by numerous other children and counselors who serve as role models,” she said. “They have discussions about topics like forgiveness, grace, relationships, and service. They sing, they dance, they create, they pray, they tell stories, and they dive into God’s Word and God’s plan for their lives. Long after they’ve left camp, they’ll look back on their experience at camp as a time when they met God in a very real way.”

Joyce Olderog is one of the Tri-T members who helped pack on Thursday. She heard about the organization from a friend, and has been involved for a few years. She smiled a great big smile when she talked about the anticipation of getting the St. Paul van and taking the girls to camp.