Sights and sounds of the sanctuary 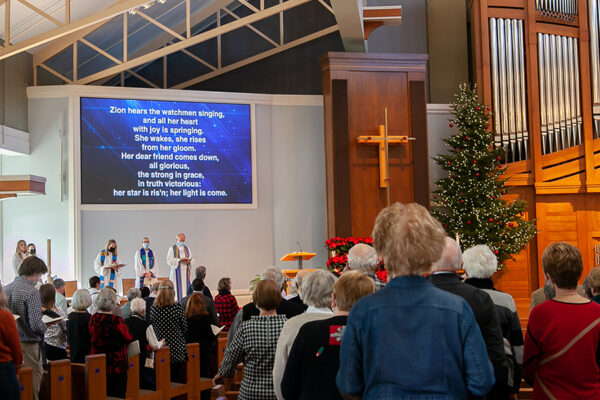 Since 2007, St. Paul people haven’t needed to keep their heads down and eyes in the red hymnals. Instead, eyes were up and engaged, with the needed words illuminated on the sanctuary screens. And beginning in mid-December, those screens were lit up even more brightly for all to see.

St. Paul operations director Todd Byerly led the screen upgrade project from its inception in 2019, through the research and planning stages, and finally, to its completion in December 2021. Todd worked closely with two local companies, TopNotch Productions and Merve Iossi and Sons, to complete the project.

TopNotch specialized in the change to LED technology, offering guidance on products and technology as well as behind-the-scenes technology to run the equipment that would best fit St. Paul’s needs. The role of Merv Iossi and Sons was to build and install the support structures for the new screens. This process required minute attention to detail to effectively modify the existing space in the front of the sanctuary and create an entirely new structure for the installation of the new screen in the back.

Todd says one of the most noticeable changes in the sanctuary is the brightness and clarity of the screen.

“Most people walk into the sanctuary during daytime hours, during high ambient light, so what they’ll notice right away when the screen is on is that they’ll actually be able to see color and images whereas before the images were darker and less clear in that lighting setting,” Todd said. “Even during a bright sunny day, the picture display is as clear as day and what you currently see on the screens during worship is only half of the brightness the new technology is capable of handling.”

Adding a second screen on the back wall of the sanctuary provides a multitude of uses for pastors, visiting guests, events and productions, and more.

“Everyone that is not able to see the main screen should be able to view the rear screen — from the pastors and choirs to the children in the Christmas pageant,” said Todd. “The screens are linked but you can run the same or separate content on each screen.”

Miles Thompson, owner of video production company Miles and Mackenzie and frequent St. Paul videography contributor, offered his help during the installation of the project. Miles noted that Todd’s leadership, skillset, and knowledge are what allowed such a swift and efficient completion of the project.

“One of the big things Todd did is all of the electrical work. He used his unique skill set for that which is a lot of work,” Miles said. “He used his strengths in the preparation work prior to the screen being installed. I was impressed with how Todd was able to organize and manage the project to be completed in a week and a half so the congregation experienced very little screen downtime.”

The new technology lends itself to many new and exciting types of uses and projects in the future.