Up high on the steeple at St. Paul, a crew is working to replace the 64-year-old glass and wood in a structure that shines light in the darkness and beckons countless people to worship each week.

The steeple, built in 1952 with the original Sanctuary at Brady and Lombard streets, needed a bit of a facelift after time and Iowa weather left it worn. For the past two weeks, crews from Glass Heritage in Davenport have been working with a bird’s-eye view of the St. Paul neighborhood. 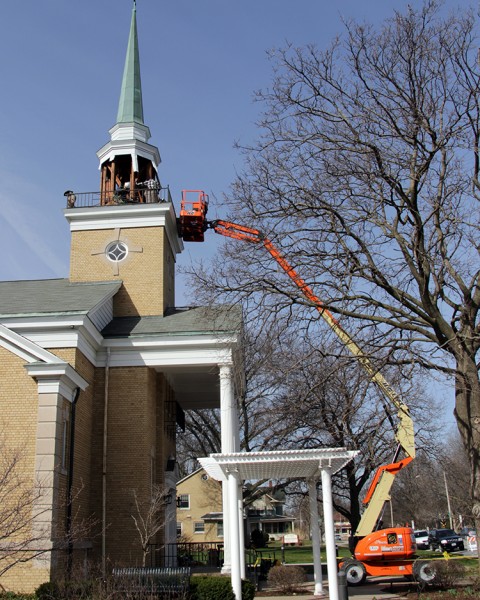 Crews removed deteriorating window frames and plywood, as well as siding and flashing. They replaced all of that material, including items that better match newer portions of the church. New windows in the steeple were installed, as well as three circular windows right below the steeple. They also installed boards behind lighting fixtures to help the light shine brighter.

Glass Heritage is a 12-year-old company that creates and restores art glass for a wide variety of organizations, including churches, said Mac Lopez with Glass Heritage.

Locally, recent projects have included installations at the new Kahl Home for the Aged in Bettendorf, as well as work for Alleman High School in Rock Island. Some of their most notable projects include restoration of eight original Frank Lloyd Wright windows in the Park Inn, Mason City, and the full restoration of the Grant Wood stained glass window at the Veterans Memorial Building in Cedar Rapids. This is the only stained glass window designed by artist Grant Wood. 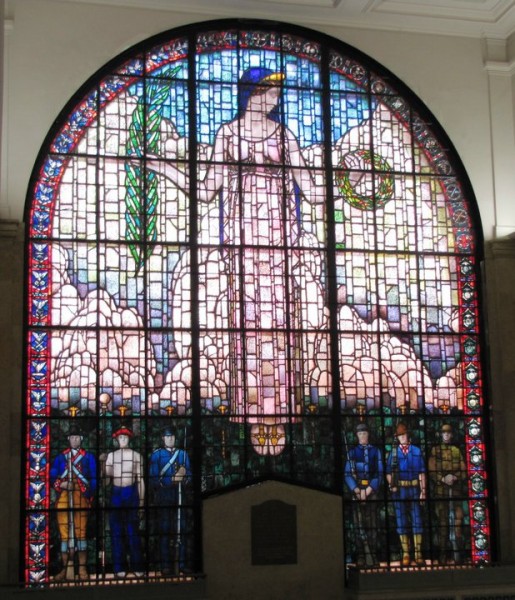 The construction of the steeple is documented in the St. Paul archives. During a February 1952 meeting of the church building committee, the members talked of the completion of that part of the project.

“The large 38-foot spire was hoisted into place. Workmen have begun to put the finishing touches on the tower and spire. With a few days of good weather, we will be able to see this part of the work finished and observe the real beauty of the exterior of our new church.”

The project also was covered in the local newspapers.

“The spire, which weighs in the neighborhood of 2,400 pounds, is of wood construction and covered with sheet copper. A colonial pattern, it was designed by the late H.C. Haueser, architect for the building. Erection of the spire was under the direction of Henry Schaefer, general contractor. Equipment used is that of Friends & Co. The spire is 90 feet off the ground.”

The first services in the 1952 sanctuary, which is now the chapel and the chapel commons area, were held in August of that year. The entire project cost $325,000.