The story of Missey Andrews completing the Boston marathon begins with dabbling with getting out and walking 11 years ago. 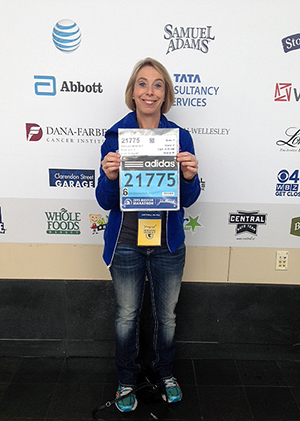 As she walked, she would see how far she could run. At first, it was not so far. Then she signed up for her first 5k and finished. Next up, she finished a 5k in 30 minutes.

Then the Bix 7. Then a half-marathon. That was in 2007. She thought for sure she would be the last person in. Instead, she finished it in 2 hours – a very respectable time. Then she signed up for her first marathon – Green Bay in 2008.

As the years went on, Missey usually did three or so marathons each year. She dreamed of running the Boston Marathon, but qualifying means running 26.2 miles in three hours, 55 minutes or less at another marathon.

That happened twice for her in 2013, in the Twin Cities and in Indianapolis. Missey signed up to run Boston in April 2015. Her husband, Mike, was her biggest cheerleader. He was a dedicated volunteer for the Cornbelt Running Club, too.

“He told everyone I qualified,” she said. “We were going to make a vacation of it.”

But Mike, 55, was diagnosed with cancer in August 2014. Family and friends surrounded them as he battled, including a lot of running friends. He died in October.

“I questioned whether I would go to Boston,” said Missey. “But I knew I needed to.”

So she went. One of her friends – who also supported the Andrews family during Mike’s illness – went with her. And she ran.

“I took my time,” Missey, 47, said. “The weather was nasty. But I decided I was just going to run and enjoy it. The course was just amazing.”

Missey finished in four hours, 27 minutes. That equals an average of about a 10-minute mile.

“He would have been proud of me,” Missey said of her husband.

For Missey, “running is my sanity. It clears my mind, it connects me with other people. If I’m feeling down in the dumps, it helps me work through my problems.”

Missey is already planning for her next marathon, likely this fall.