A church, in prison 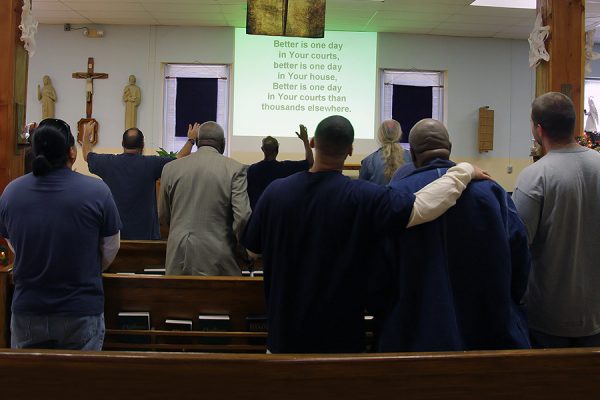 At the piano, an inmate leads the music. Men’s voices fill the air with familiar tunes. Let there be peace on Earth, they sing. How great Thou art.

Fellow inmates take their turn at the lectern, reading the texts for the day’s worship. One man manages the projector with the words to the songs and prayers, and another helps at communion with tiny cups of grape juice.

“This is the blood of Christ, shed for you.”

Welcome to Free Indeed, a Lutheran congregation that meets for worship every weekend at the Anamosa State Penitentiary. Jerry Collell is their pastor. It’s a new congregation, started this summer. About 20 or so men gather each week. As time goes on, the hope is that worshipers from the outside will come and worship too. St. Paul’s Mission Board recently gave $2,000 to the congregation.

The men sit on wooden church pews in the brightly lit and spacious chapel. They confess their sins. They hear a message. They shake hands. They kneel in prayer. The reminders that this is a prison fade into the background – the bars on the windows, the corrections officer who periodically walks through the chapel, the plain blues of the inmates’ clothing, the identification cards clipped to everyone’s shirts to designate staff, visitor, and inmate.

“Even here, the good news is very present,” Jerry says during his message one Sunday morning in December. He’s been a pastor for three decades, with substantial time spent in prison ministry. “God comes to us in the hardest of times.” 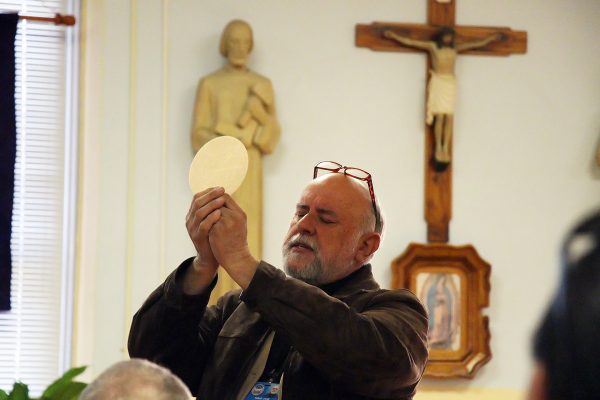 The Free Indeed worship is one of 18 held each week at the penitentiary, said Anne Williams, the prison chaplain. To be an officially recognized religious group at Anamosa, five inmates must step forward and fill out paperwork. Once recognized, the group may hold worship, are allowed specific faith-related items in their cells, and can hold up to two feasts a year. Most inmates are allowed to attend worship once a week; some in more restrictive environments can attend once a month.

At the same time as Free Indeed gathers, Buddhists, Jehovah’s Witnesses, and a Reformed Protestant group meet in adjoining spaces. The prison is home to many other religious groups, including Muslims, Wiccans, Catholics, Seventh-Day Adventists, Hebrew-Israelites, Messianics, and Luciferians. Other special services are held, too. The women’s choir from an AME church in Waterloo
came to sing on the Saturday before Christmas. Memorial services are held for prisoners who die. For those whose ashes are not claimed, the administrative staff of the prison holds a small service at the prison’s cemetery, Warden William Sperfslage said.

Worshiping communities within prison are one way that the prison can fulfill its hope of inmates never returning to prison again, the warden said. Not only do they help support the inmates while they are serving their sentences, inmates who come out of prison with education and job skills, and connected with family, friends, or support networks like churches, generally do much better on the outside.

“My goal is that we have no repeat customers, to help these guys succeed,” the warden said. “No more victims. That’s the ideal.”

Free Indeed follows the model of the Prison Congregations of America. It is one of four such congregations in Iowa’s prisons. The concept is based on the idea that the inmates are active members of the worshiping community. They are guided by a pastor from the outside, like Jerry, who is trained by and accountable to a sponsoring denomination, like the ELCA. An inside council and an outside council (former St. Paul pastoral resident Dan Kuckuck is a member of the outside council) lead. The community is supported financially by churches on the outside.

“Jesus invited all people back into family, back into community,” Pastor Jerry said of the foundation of Free Indeed.

The beige-painted entrance gate closed behind two Free Indeed worshipers from the outside last month. A second gate opened to let them inside the penitentiary. A climb up a large staircase took them to the chapel/auditorium/library area. After one of the many daily inmate counts, radios crackled alive with chatter and men start filtering in for worship. Some sat quietly and off to the side. Others greeted each other with smiles and hellos. They opened with confession, then the singing began.

The message was about comforting good news.

As the men listen, a mural by artist Ernest Garthwaite, painted in the 1960s, hangs on a nearby wall. At first glance, it appears to be Jesus hanging on the cross. But it’s not. It’s the thief who died beside Jesus, looking up to Jesus, who is not visible in the painting.

“This is not the end, it is the beginning,” Pastor Jerry said. “In the wilderness of the (prison) yard, you may think this is time wasted. It is time to be one with God. It is time to not just be penitent, but to be set free. God is present with us. God loves us.”

Interested in worshiping with Free Indeed at the Anamosa State Penitentiary? Plans are in the works for a visit sometime in the first part of 2018. Volunteers must pass a background check and be willing to follow prison security measures, such as no cell phones. To express interest, connect with Ann McGlynn, ann@stpaulqc.org or 563-326-3547.

Anamosa State Penitentiary is a maximum/medium security facility, and houses approximately 900-950 inmates, according to the prison’s 2016 annual report. More than 300 people work at the prison, which is in Jones County, about an hour and a half from the Quad Cities. The average age of inmates is 39, with an average education of just less than a high school diploma. The average length of sentence is 29 years, with 218 serving life sentences and 656 convicted of violent crimes.

Through a contract with Kirkwood Community College, inmates can take courses in adult literacy, high school equivalency, or college credit. They can work in a variety of jobs through Iowa Prison Industries, and take part in apprenticeships through a program recognized by the U.S. Department of Labor.

2 Comments on “A church, in prison”