The first hunches came from her mom. Patty Maiden felt like her pregnancy with Alison was different than her first daughter, Emily. When Ali was born, she aspirated and the doctors whisked her away. They noticed some things that were out of the ordinary. And then Ali got really sick. Tests determined Ali had a very rare chromosomal abnormality. Some thought Ali wouldn’t live for very long at all.

Thankfully, oh so thankfully, that baby survived. And thrived. And loved. And was loved. Ali Maiden did die young – at just 24 years old – but the life she lived? A gift. 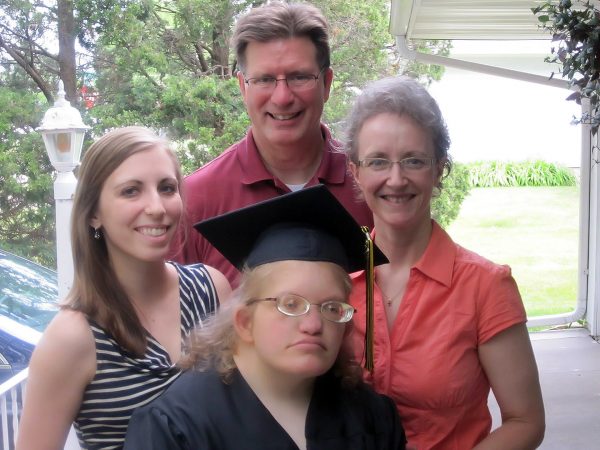 Purses, $20 bills, and mail trucks
You would be hard-pressed to find Ali Maiden without a purse. She had lots and lots of purses, and almost always had one hanging from her arm. A photo from her first day of kindergarten shows her with a purse and money in hand. Her favorite purses seemed to be the least-expensive and most interesting – a $1.38 purse from Goodwill comes to mind.

Ali went into meeting someone new with the assumption that they would like her. Ali communicated with her own version of sign language. She also had an electronic communication device. With the combination of the two, she’d always have questions to ask new people she encountered. Big burly guys waiting in line at Gordmans? Questions. Sweating it out at the Y? Questions. Sitting at a restaurant? Questions.

“If only the whole world thought that way,” Patty said of her daughter. It made for some interesting encounters, Emily said of her sister.

Emily eventually became a caretaker for Ali, through the agency Ali received services from.They visited all sorts of people and places together. Paul at the Bettendorf library saved up $20 bills for Ali to look through to find 9s in the serial numbers. The staff at Gordmans saved up paper because they knew Ali loved to come in and sort through it all. Ali loved going to the YMCA, but she also loved trying as hard as possible to get out of walking her laps around the track – strongly indicating she needed a drink of water or a bathroom break.

She did not like being outside. She liked food because it gave her something to put ketchup on.

“Having Ali as a sister exposed me to people and experiences that I never would have had. I never felt cheated at all,” Emily said. Anyone who was Emily’s friend became Ali’s friend, including Emily’s now-husband Mike Reinholdt. 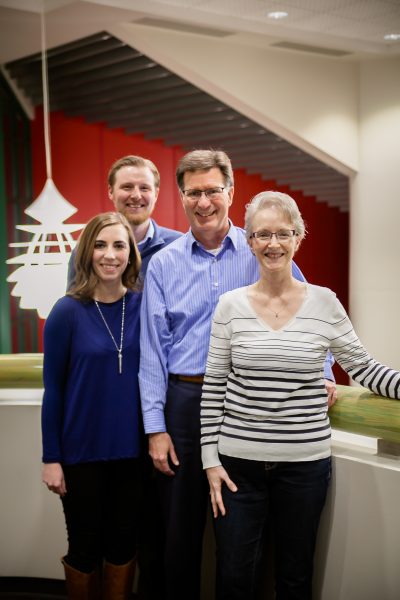 Ali’s caddy
As Ali neared high school graduation, the Maidens prepared for her moving into her own place. “Patty was ready, and Ali was ready, before dad was ready,” dad Gary said. Ali moved into an apartment in DeWitt, Iowa, with a roommate. On Sundays, Gary picked her up for church, lunch, and a drive to check out some of Ali’s favorite things – mail trucks at the post office and determining whether there were any tennis balls left behind at the courts at Bettendorf Middle School. Every fourth Sunday, Ali and her dad ushered at St. Paul.

The Maidens say life was not always easy with Ali. For example, she could not independently dress, bathe, use the restroom, or other similar tasks. Someone always needed to be with her. When times were particularly hard, the Maidens focused on separating Ali’s disability from Ali the person. “We were fortunate, during Ali’s life was the golden age of services,” Gary said, noting the recent shift in Iowa of the care of people with disabilities. “Services are going away, and it’s just wrong.”

In the months leading up to her death, Ali had a hard time fending off sickness. On a Sunday morning in January 2015, she ushered at church. By that following Thursday, she was gone.

“It was the worst night of my life,” Patty said.

On the family’s Sundays together, the docket included a trip to Hy-Vee. Ali stopped by the Starbucks inside the store to trade out $20 bills with 9s in the serial number, picked out the same greeting card to purchase, along with two packages of paper plates, and two Kit Kats. Her dad would then mail the greeting card to Ali, with a bit of money inside.

He still has the last greeting card she bought. Some of her purses still hang on the back of a chair in their home. Her Coin-U-Lator (a game with money) remains in a drawer in an upstairs bathroom. “She had a ton of personality,” Patty said. “We just really miss her.”

Ali’s gift
When Ali died at Genesis Medical Center – DeWitt in February 2015, her family chose to give the gift of healing to several people around the country. From that gift:
■ Sixty-four grafts of bone and connective tissue were completed, in California, Colorado, Illinois, and Missouri. The ages of the people helped range from an 11-year-old girl to an 80-year-old woman.
■ Three grafts of skin were completed, in Georgia and Michigan, including for a 20-year-old man and a 73-year-old man.

“Alison’s donation has enhanced the lives of those who received her gift,” wrote Julie Farren, donor family care specialist with the Iowa Donor Network. The letter arrived in February, two years after Ali’s death. It took some time for the Maidens to open it and read it. “It is our hope that each recipient will experience freedom from pain, greater mobility, and the opportunity to live a more active life.”

Twosday, featuring Ali and Emily
In a series of Facebook posts on Tuesdays that Gary Maiden calls Twosdays (for his two daughters), he remembers favorite moments and photos of life with Ali and Emily.

Alison finally leaves the NICU and gets about six feet out the door before Emily is all over her. We go home and Em wants to hold Ali NOW! (Note that Patty still wears her coat and scarf.) Twenty-three days is a long while to have a new sister but mostly just to look at through glass. They made up for lost time! 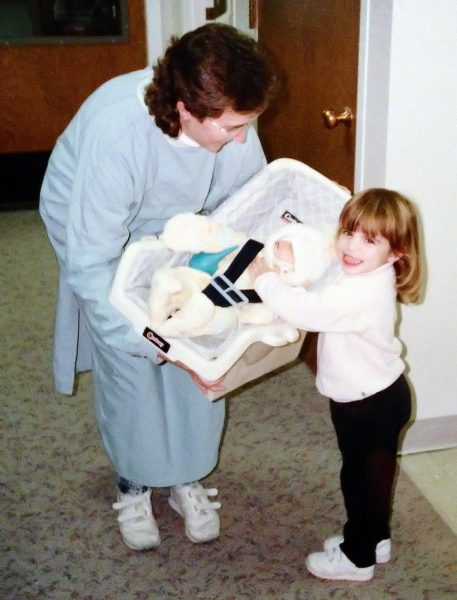 Our girls’ birthdays have always been big deals, so big that they were dubbed Emipalooza and Alipalooza. 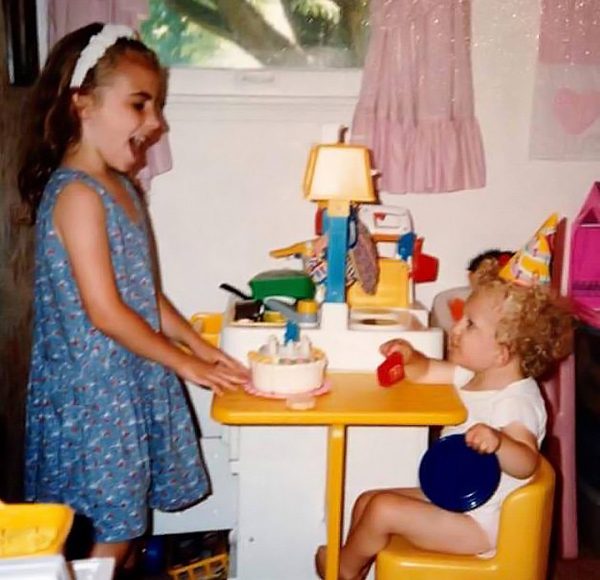 It was established previously that Alison was not fond of grass. She cared even less for sand, so this shot of her in the turtle sandbox is quite rare. She only looks mildly miffed. We commemorate this moment during the Christmas season with the turtle sandbox ornament. 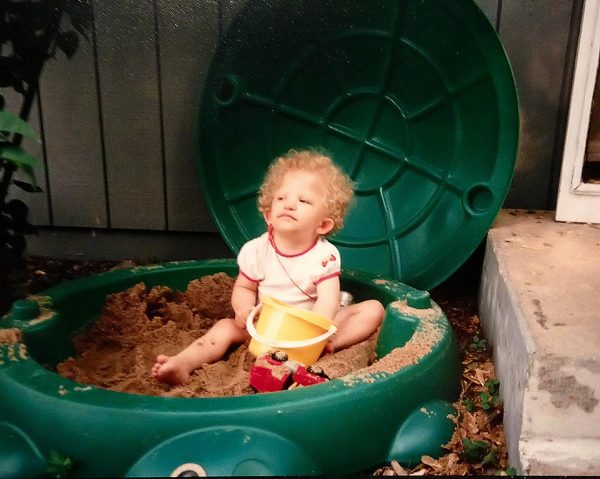 A shot of the two cool sisters, Alison and Emily, on the weekend of Em’s graduation from Wartburg College. 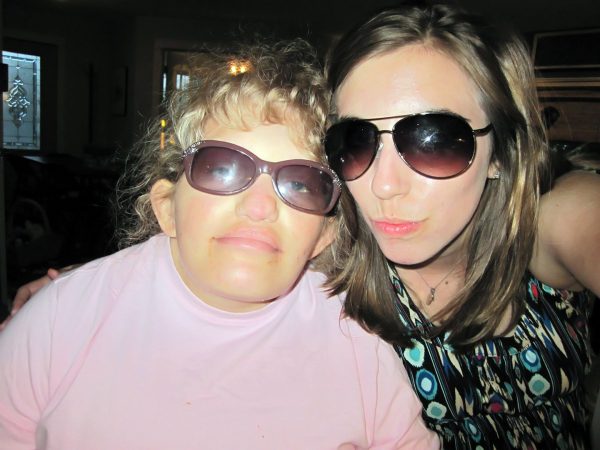