A lifetime of practice

As a 15-year-old, Larry Minard asked his rather unapproachable pastor if he could come and practice on the church’s organ. The pastor offered to turn on the organ, and Larry sat down to play.

He played for worship at church at 17, the old Lutheran liturgy that was “pretty complicated,” said Larry, now 74 years old. But with no fear of making mistakes, he was thankful to make a little bit of money. He played for the funerals of what seemed to be ancient relatives at the time. 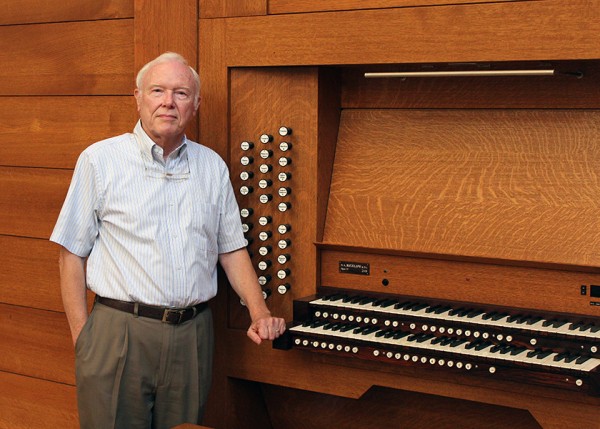 And when he went to Wartburg College, an aunt paid for him to take organ lessons, which led him to play for chapel and Sunday services on an old Hammond electric organ.

This was the beginning of a lifetime of posing the question, “Do you mind if I come and play the organ,” sometimes in rather remarkable places.

“My organ playing is scattered about,” said Larry, who is a retired Davenport Central High School teacher, wrapping up his last term on the Scott County Board of Supervisors.

He’s played the organ at St. Sebald Lutheran Church in rural Strawberry Point, Iowa. It was where he and his wife, Carol, were married. Established in 1853, the church was instrumental in the founding of the Evangelical Lutheran Synod of Iowa, which was conceived in the basement of its unfinished parsonage on August 24, 1854.

And when he went to Cambridge, England, to study in the mid-1970s, he walked into St. Giles Church and asked if he could practice on their organ. The answer? Yes. The beginnings of St. Giles are recorded in 1092. When Larry walked to the front to play, he would pass under an arch that read: “Under this arch, St. Anselm walked.” St. Anselm was the Archbishop of Canterbury from 1093 to 1109.

He visited other churches during his time in England, too.

The chapel at King’s College started in 1446 by Henry VI and took over a century to build. It has the largest fan vault in the world and some of the finest medieval stained glass. The Ely Cathedral, where the organ thundered so loudly, “my tie vibrated,” Larry said. Worship has been offered on this site for nearly 1400 years.

Once Larry returned to the United States, he taught humanities at Davenport Central, covering philosophy, art, and music. He would take students to Trinity Cathedral across the street or here to St. Paul to play music for them as part of their coursework.

He played for a wedding at Sacred Heart Cathedral in Davenport, and at Bettendorf Presbyterian, too. But there were periods of time when he would go a year or two without playing. For a time, he took lessons from Melanie Sigafoose, the former director of music ministries at St. Paul. “I was probably her oldest student.”

And on Monday mornings (when he’s not teaching a community college class), one can find Larry at the keys of the St. Paul organ, playing from a stack of favorites from his nearly 60 years as an organist. His eyesight is a bit tricky these days, so he sticks to the pieces he knows well.

“The pathways are still there in my brain,” he said. “I don’t have a purpose when I come in to practice. It seems like after all these years, I should keep playing.”