Jim Blaha is a funny guy. In middle school, he ran for student council. His campaign slogan was Vote for James Blaha – He’s No Joke. Get it? Blaha, kind of like haha.

He won the election, he says with a big wide smile.

Jim absolutely loves music, carrying an FM radio with him wherever he goes (it’s his version of an iPod). He has a bachelor’s degree in communications, and worked in radio and as a copywriter, too.

He volunteers at his church each week to help in the kitchen, sing in the choir, and read at worship.

Jim’s job is preparing food samples for a grocery store. Last week, for example, he offered customers a wonderful organic pizza with sundried tomatoes on top.

He lives in a homeless shelter.

Jim first met Pastor Eardley Mendis at a soup kitchen. The pastor had stopped by to talk with some folks who were there, and noticed Jim was sitting at a table with his daughter’s picture.

Jim explained that he doesn’t have contact with his daughter anymore. Pastor Mendis invited him to First Lutheran for a meal. That was six years ago. Unless he’s at work, Jim is at First on Sunday mornings.

The people of First have been a significant support to him. For example, last spring, Jim learned his mom was dying. Jim didn’t have the money to make it to nearby Elmhurst, so the people of

First made sure he made it to see her.

“I got there, and I was able to hold her hand and touch her face, and tell her thank you for all of the good things she did for our family,” Jim said. “That night, she passed away.” 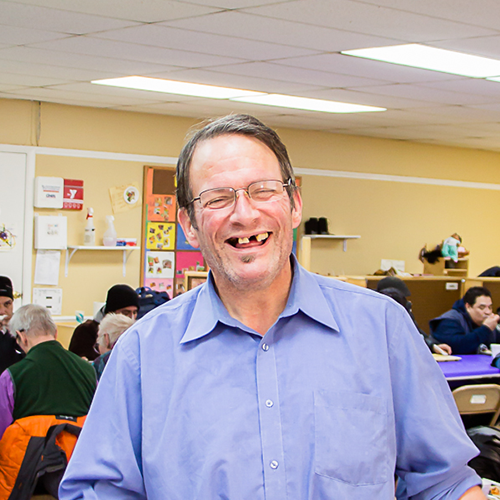 Jim is missing a front tooth.

He hates that he’s missing a tooth. Really hates it. He was a bit hesitant when asked if he’d be willing to have his picture taken. He’s self-conscious about the tooth, after all, not sure he’s good enough for a photo.

Good enough? Oh Jim, you’re most certainly good enough! Your smile is wonderful! Your eyes crinkle with joy. You light up the room…this room!

He had never thought of his missing tooth that way, he said. And then he said yes to the photo. He stood near a row of tables in the basement of the church, as people ate lunch together.

“OK, let me think of something funny.” He pauses. “I know, I’ve got it. The Cubs winning the World Series!”

Yes, Jim, there is joy in all of our imperfections.