Everything was ready by early December. Hana Strickler was convinced she was having her baby early. Her due date was Dec. 21, but Hana, her husband, Brian, and daughter Molly, were well-prepared right after Thanksgiving time.

“I’m not having this baby on Christmas!” Hana replied.

The Stricklers arrived home late on Christmas Eve. Hana told her husband, “We have to go to the hospital now.” Grandpa Ben Cleaveland came to the house. Hana and Brian were at the hospital by 10:30 p.m. By 6:30 a.m. Christmas morning, Quinn Lucile Strickler was born. 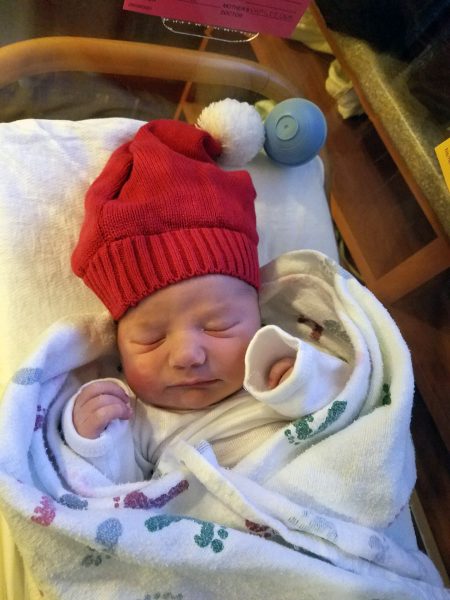 As she held her new baby girl, Hana’s sister-in-law sent her photos of Molly opening her Christmas presents. And the traditional eggbake breakfast? “I missed eggbake!” Hana said. Her family brought it with them when they came to meet Quinn at the hospital that day. A picture of a full room of visitors marks a very special Christmas.

The hospital meals Hana ate all included a delightful Christmas card. She saved each one for Quinn’s memory book, along with the front page of the newspaper from that day. Hana and Quinn went home from the hospital on Dec. 26. This year, Quinn will turn 1. She was baptized at St. Paul the Saturday after Thanksgiving.

Quinn, sometimes called Christmas Quinn, is a calm, happy baby with a smile that lights up the room, her mom says. As she grows older, mom says the possibilities are endless for her future birthday celebrations. Perhaps she will celebrate on Christmas Day, or on another day close by. Or maybe she’ll choose to mark it on her half birthday – June 25 could make for a fun summer birthday party. “I’ll let her decide,” Hana said. 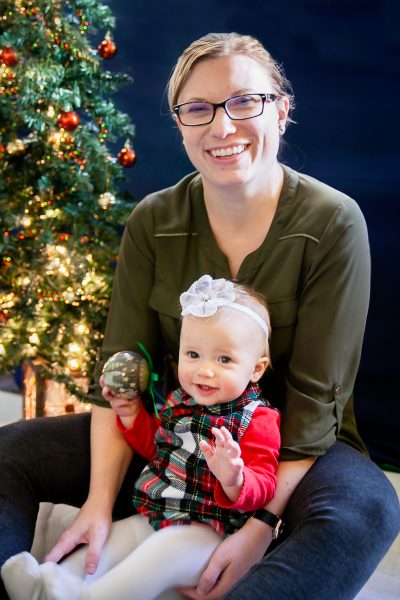 From lutefisk to cake, a Christmas celebration

He blames it on the lutefisk.

Jim Keller was supposed to be born on January 7. But his mom ate her family’s traditional lutefisk on Christmas Eve before going to church. By 10:30 a.m. Christmas Day, she held a baby boy in her arms. Jim chuckles. He’s pretty sure that baby boy wanted nothing to do with that lutefisk.

He grew up in southwest Minnesota, the oldest of four. Windom is one hour straight north of Lake Okoboji. Christmas Eve was about church and opening gifts. Christmas Day and Jim’s birthday were always about family gathering at his house. Aunts, uncles, cousins, grandparents, great-aunts – 20-25 people came over for Christmas dinner. Grandma always brought a kettle of homemade baked beans, and someone always made mincemeat pie. Salads, scalloped potatoes, and pies completed the meal.

After the family ate, many of them headed outside for the sledding hills.

He remembers his favorite Christmas/birthday gift was a rod and reel from his aunt and uncle, when he was in about fourth or fifth grade. “It was a non-winter gift. I was thrilled. I could go bullhead fishing on Wolf Lake.”

He did receive a rocking horse when he turned three years old. Harry the horse was a gift from his grandparents. It stayed in his mom and dad’s basement until all the grandkids were too old to ride it. Jim then decided it was time for a bit of refurbishing. Harry the horse is now good as new, with new paint and handles to hold onto for his grandkids.

When Jim became a parent, he and his wife Vicki continued the family tradition of opening gifts on Christmas Eve. They would all get up early on Christmas morning and head to Minnesota to be with family.

And that brings us back to food. Jim’s Christmas birthday story began with lutefisk. It’s now wonderfully centered on cake. Somewhere along the line, Jim’s birthday cake became a Christmas tree birthday cake.

Each year, Jim and Vicki get together with their sons, daughters-in-law, and granddaughters. The granddaughters make Jim a Christmas tree birthday cake. Age 7 months to 7 years, Frannie, Nora, Josie, Nellie, Cece, and Jilly are experts at green frosting (and many other colors, too).

“Now we have these six little granddaughters. They do a marvelous job of decorating my cake,” he said. 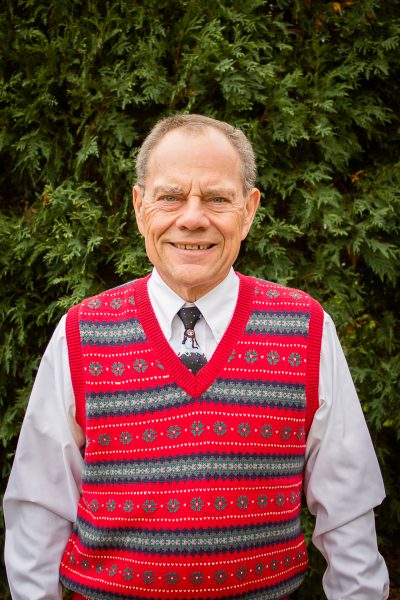