A note at a time, Beth Bigelow made her way through the keyboards of the St. Paul organ.

While she slowly and methodically sounded each sound, her husband, Mike, worked inside of the instrument, tuning. The two spent two days at St. Paul last week, caring for the instrument that their company, Bigelow & Co. of American Fork, Utah, built and installed eight years ago this December. It was one stop on a cross-country journey to check in with Bigelow organs, from a Catholic church in Nantucket to the New Melleray Abbey in Dubuque.

“We meet the friendliest, nicest people,” Beth said of their journeys. 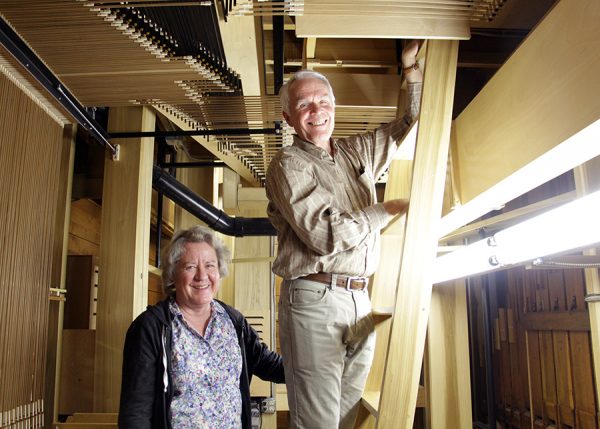 Mike first fell in love with pipe organs as a keyboard student in high school. He apprenticed with John Brombaugh, a master pipe organ builder. Today, Bigelow organs can be heard throughout the country; Opus 42 is the latest project underway. The first, Opus 1, was installed in 1979 in Chico, California. The couple and about a half-dozen of their employees work in a former church in American Fork. The Bigelows live upstairs in what used to be the Sunday school classrooms.

The St. Paul organ stands nearly 36 feet tall at the highest tower. From pencil-sized pipes to the soaring 16-foot “Low C” pipe in the organ facade, the pipes number 2,335. Materials from all over the world combine for musical excellence. Two keyboards originated in England. Metal pipes of were built in Holland. Reed pipes came from Germany. It was built in Utah, dismantled, shipped across country by semis, then rebuilt on site.

On this particular visit – visits happen once every few years or so – the Bigelows checked in on sounds that they know sometimes move a bit out of tune, due to the material the pipes are made of. Mike used scrolls and wires on the pipes to line their sound back up.  He checked in a few “squeakers,” too. He also worked with the the bells of the Zimbelstern – the star-shaped feature towards the top of the organ – to ensure they were all working just right.

Nearly done with his work, Mike took a break and talked about what he appreciates most about the St. Paul organ. Practically, he smiled, he loves that there is plenty of space for him to move around inside of the instrument. Of course, he loves the sound. The design, he said, is one of his most favorite aspects of building organs – and designing Opus 33 was no different.

“It looks like it really belongs in this space,” he said.