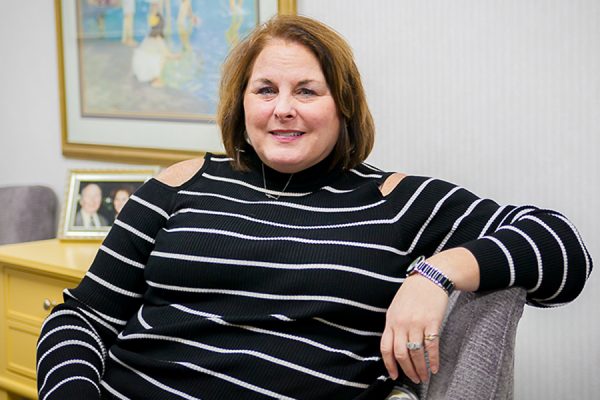 Seventeen years ago, Bethe Lonning heard an idea that she thought could really help people seeking mental health care in the state of Iowa. She was attending a conference for state leaders of the American Psychological Association. Bethe is a psychologist in Davenport.

New Mexico had just passed a law that gave specially trained psychologists prescribing authority. It meant that with additional post-doctorate training, professionals could prescribe specific medications to patients who needed them. A prescription from a physician or psychiatrist was no longer necessary.

And that’s when Bethe started on a long, winding, sometimes seemingly impossible journey to change the rules to allow the same in Iowa. Six weeks ago, on Feb. 20 to be exact, the rules finally went into place.

“I wanted people in Iowa to have more choices for their mental health medication needs. I was tired of patients having to wait 4-5 months or longer to see a psychiatrist,” said Bethe, a St. Paul member. “Over 80 percent of psychotropic medication is prescribed by family practice doctors who have limited training in mental health disorders. I wanted to be able to help this situation.”

Two-thirds of counties in Iowa do not have a single psychiatrist, making it difficult for patients in need of medication for mental health disorders to receive it from a psychiatrist, the American Psychological Association said. It can take months to get an appointment. Even if they are able to find a doctor with available appointments, patients may have to drive an hour or more to get care, particularly if they live outside of major urban areas.

A 2014 annual report of health in Iowa issued by the Iowa Department of Public Health revealed that 18.7 percent of adults in the state reported having a depressive episode. According to a 2014 report from the Substance Abuse and Mental Health Services Administration covering 2009-13, 51.2 percent of adolescents and 50.7 percent of adults in Iowa with depression and/or a major mental illness did not receive treatment, the APA said.

This change will directly address access issues by increasing the number of available providers to prescribe medications. It did not happen, however, without significant persistence, tenacity, and hope.

Two years after Bethe first heard of the idea, she was part of a committee that formed through the Iowa Psychological Association. She and others spent time talking with others about the proposal, and what it would mean for patients in Iowa.

Now, this makes it sound easy. Without getting into the complicated workings of the Iowa state Legislature, we’ll just leave it at this: It was nowhere near close to easy.

On May 25, 2016, Bethe was visiting her parents in northwest Iowa. Her dad was a psychologist, too. She was out shopping when she got a call. The news was good – then-Gov. Terry Branstad signed the legislation into law. “I went and bought a pair of shoes and some diamond earrings,” Bethe said. Still, there was work to do. The law passed, but the state professional boards who oversee physicians and psychologists had to come to agreement on the rules that would allow this to happen. They had until the end of 2018.

Meetings with lots of back-and-forth took place. Towards the end, Bethe started to give up hope that it would finally happen. The final meeting of 2018 for the Iowa Board of Medicine was Dec. 14.

Bethe attended with colleague Brenda Payne, who also spent time fighting for the measure. They walked into the meeting, and it was packed – not exactly a common occurrence. They realized that the crowd was there for a discussion of another matter – the use of medical marijuana in the state. They sat. A board member called for a vote on their measure. It passed. “It took 10 seconds,” she said. “I looked at Brenda, she looked at me. I couldn’t believe that it happened.”

Iowa is the fourth state to allow psychologists to prescribe psychotropic medications.

APA supports prescription privileges for appropriately trained psychologists as a way to help address the shortfall between demand for medications and the number of behavioral health professionals — particularly psychiatrists — who can prescribe them.

“Lacking mental health prescribers, we are not offering the full range of available options to our patients,” said Sean Evers, of the American Society for the Advancement of Pharmacotherapy. “Clinically, it becomes frustrating to know that ‘Gee, I could really fix this motor if I had this one wrench, but there’s no wrench store in this town, and there’s a six-month wait to order one.’”

The hope is that Iowa’s move will boost momentum in more than a dozen states where bills are making progress, including Hawaii, Idaho, New Jersey, New York and Ohio, said Deborah Baker of the APA.

All told, there are some 200 prescribing psychologists in the nation, she said, and training more will take time. Though state laws differ, psychologists must do significant work on top of their doctoral degree, including completion of a master’s degree in psychopharmacology (or equivalent), supervised clinical training, and passing a national exam.

In Iowa, it will indeed take time before any psychologists will be able to prescribe. Bethe has already completed coursework toward the goal.

“I have prayed about this whole thing for years,” Bethe said. “I have never prayed for a specific outcome, rather I have prayed for guidance and courage to continue and for grace to accept whatever outcome may happen.” The final actions that made the hope a reality, she said, were “the best Christmas gift I’ve had in a long time.”