In her own words: Ice cream cone

It all started with a McDonald’s ice cream cone.

You know, those soft-serve-only-cost-a-dollar-170-calorie snacks one grabs at the DeKalb Oasis if so inclined while road-tripping with your high school girlfriends to Chicago for the weekend. Not what one would exactly call a binge or overeating by any means.

But it was the tipping point. 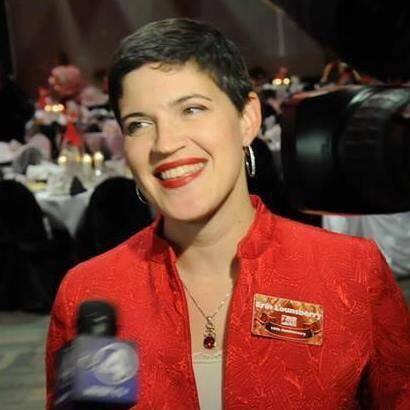 Looking back on it now, it all sounds so stupid. I mean, how can one little snack like that seep into your brain? It’s easy if you’ve been subtly conditioned by society to think less of yourself because of your food choices. Because of how your metabolism processes food. Because you sometimes eat your feelings. Because you can’t express the loneliness of not being invited on a date even though many of your friends have. Because of any number of reasons that leave you feeling sad and vulnerable and imperfect and so very less than on any given day.

Eventually the cacophony of internal insults grows louder and louder until you need to shut it down. And the only way to do so is by sticking your finger down your throat, finding out that it’s much easier than you thought it would be.

Problem solved, right? Calories negated, as though the ice cream cone never existed. Relief floods you like a drug as you gain control again of your life. Gain. Control. Because that’s what this ultimately turns out to be about, really. Control.

Not being skinny. Not being healthy. But being in control when the world around you seems so damn scary and unsure and out of control.

Sure, there’s a little bit of shame for how gross it is to throw up, and you find yourself washing your hands over and over and over just to make sure there’s no telltale smell that will give your secret away. Because part of trying to attain perfection – or its illusion – is masking any part of your life that seems messy or imperfect after all.

And, of course, there are the promises to yourself that you will never do it again. This was a one-time occurrence, you assure yourself naively. Then one day you find that an ice cream cone has become an entire half-gallon of ice cream and once in a while becomes once every day until at the height of your illness you are using more credits on your college food service meal plan than the offensive linemen on the football team and throwing up seven times a day.

Look! the voices hiss. You have friends. And popularity. And good grades. And accolades. And talent. And a bright future. You are no longer less than.

But you never believe them.

Because the one thing that always exists is the shame that you no longer have control over something that you thought was giving you control. And the guilt of being so very less than takes over again. It’s a vicious cycle.

That was my life from 1986 through 1993. While I can identify the tipping point that started me down this very dangerous path of an eating disorder, there is no one moment in time that brought me to the other side. It was an accumulation of moments and fresh starts and stumbles and dusting myself off and beginning again that got me there.

There was the college roommate who encouraged me to seek help at the counseling service and even celebrated on a sticker chart on the back of our dorm room door whenever I had a day without throwing up. I think I once had a streak of 19 days straight going, which was quite an accomplishment at the time. I felt like I was 5 years old, but boy did getting a sticker feel good.

There was the dietitian who started teaching me how to read labels and gave me suggested food plans for guidance when I just didn’t have the mental energy to think about what would be a “good” choice.

There was the fellow student who invited me to a local support group where I started to learn some self-acceptance strategies based on the Alcoholics Anonymous 12-step program.

There was the Serenity Prayer I had written in magic marker on a giant sheet of butcher block paper above my dorm bed where I or fellow floormates could write inspirational or funny sayings as the mood so moved us. God grant me the serenity to accept the things I cannot change, the courage to change the things I can, and the wisdom to know the difference.

And most importantly, there was the quiet growth in my own resolve to conquer this inner demon and to admit that feeling so very less than from time to time was but an emotion and not a reality.

You see, overcoming an eating disorder is one of the hardest addictions to manage because unlike many others – smoking, drinking, drugs, gambling, etc. – your body physically needs your vice to function. One can quit cold turkey with cigarettes, and his or her life will go on. Quitting cold turkey with food is not only unreasonable, it’s another eating disorder in and of itself.

So learning to overcome the distorted relationship you have with food is one of the biggest challenges. You have no concept of what being truly full feels like. For years, I had to literally ask myself if I was full with every bite of food because I had spent years stretching my stomach with massive binges. I didn’t trust myself to answer correctly and had to re-learn the sensation of being physically sated.

The other big hurdle is learning to love yourself no matter what – messy and imperfect as you may be at times. Neither one are easy lessons, and I still struggle with them to this day.

There have been times in my adult life when those whispers of so very less than start stirring.  They usually center around situations where I am feeling unsuccessful and defeated and ashamed of my failures. Couple that with the fact that I now LOVE FOOD; the mere fact that it brings me joy because of how it tastes, not because of how it can stuff down feelings, is a major milestone … even though admittedly I use it for that as well some of the time.

They say that one never really is cured from having an eating disorder; one just learns strategies to manage the disease. Every day can be like waiting for someone to strike a match to throw on the kerosene poured all around me. Fortunately, I have had a fire extinguisher nearby to put out the fire before it becomes an inferno.

I want to tell her that living by a mantra of all things in moderation is a wonderful way to strike a balance. I love ice cream, steak, and red wine. But I also love grilled fish, roasted cauliflower, and sparkling water. I take a walk almost every day of the week. But there are some days when the thought of doing so just doesn’t appeal to me. And that’s OK. Because there are also days when I feel like trying to jog. Just do the best you can.

I want to tell her that comparing how you’re feeling on the inside to how someone else looks on the outside is a recipe for disaster. (And not to mention, most likely they’re doing the same thing with you.)

I want to tell her that control is an illusion.

I want to tell her that she has unique gifts and abilities of which she should feel so very proud.

I want to tell her that her special brand of messy imperfection is actually perfection personified because it means she’s human.

But most importantly, I want to tell her to love herself. It will be the single, biggest influencer of self-worth she will ever have.

And in doing so, the 46-year-old self will look in the mirror as well. And smile.

4 Comments on “In her own words: Ice cream cone”