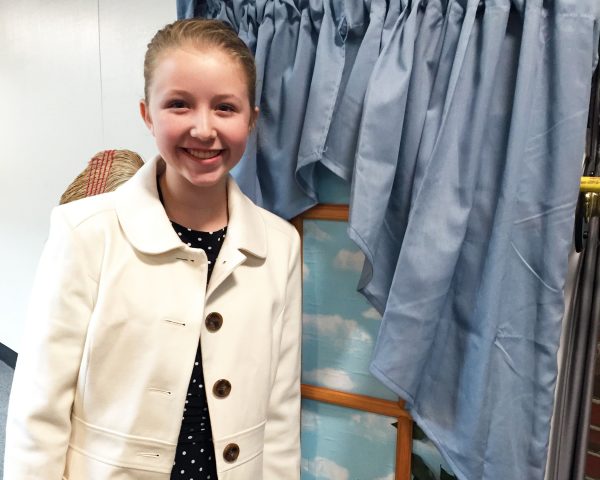 With her interest in the women’s movement of today, 14-year-old Julia Fiedler knew she wanted, for her National History Day project, to learn more about women who helped paved the way.

Julia discovered one of the leaders of the feminist movement of the mid-1900s, Betty Friedan, grew up in Peoria, Illinois, just down the road from the Quad Cities. That made her choice easy.

“A lot of time people think of feminists as hating men,” said Julia, of Bettendorf. “That was really the opposite of Betty Friedan. She believed that women should be able to do whatever fulfills them, makes them happy.”

Her 10-minute individual performance about one of the leaders of what is known as the second wave of feminism earned her a trip to the national competition in Washington, D.C. earlier this month. More than a half-million students around the world entered the contest at the local level, with the top entries advancing to state/affiliate contests, then the top two entries at those competitions were invited to nationals. Competitors represented every state, Washington, D.C., American Samoa, Guam, Puerto Rico, and international schools in South Korea, South Asia, and China. More than 3,000 middle and high school students presented documentaries, exhibits, papers, performances, and websites.

The theme for this year was Conflict and Compromise in History, and students were encouraged to “push past the antiquated view of history as mere facts and dates and drill down into historical content to develop perspective and understanding.”

The theme was quite fitting for sharing Betty’s story, Julia said. Betty’s conflict, along with thousands of other women in America, was that women were being limited in what they could and could not do. The compromise? Equal opportunities.

“What I really took from her and her story is that she broke the mold and risked her position in society to bring to light what she thought was important,” Julia said.

Betty died in 2006, so Julia contacted her daughter, Emily, and asked for an interview. Emily, a pediatrician in New York, eagerly said yes.

“It was so neat,” Julia said. “She had a lot of passion for telling Betty’s story. She was really excited about my project.”

Emily noted that her mom never actually worked outside the home, Julia said. “She worked everywhere, but she never had an office outside her home. She worked from her living room.”

Today, the fourth wave of feminism is taking root, fueled by the use of social media and speaking out against sexual harassment and violence against women.

“We’ve still got a long ways to go,” Julia said. “It’s important for me, my friends, and my sisters to see women gaining power.  If we have that representation, we have people to look up to. There was not many women to look up to for Betty. Now there is, and it’s so neat and so important.”