Mindful of the Planet

On Lenten Wednesday evenings, downstairs in Fellowship Hall, a crew of a half-dozen or so people scrape and wash plates during the congregational meal.

On a few Saturday mornings each year, a crew combs the St. Paul neighborhood, picking up garbage, recyclables, and other debris – clearing the area of a truckload of trash.

Each month, a crew makes its way down to the Recycling Hub in the basement of St. Paul to clean and sort the recycled materials collected in the day-to-day operations of the church.

These three initiatives – and more – are the work of the Environmental Team, a group of people devoted to exploring ways to help make St. Paul more environmentally friendly – and then doing the work to make it happen. 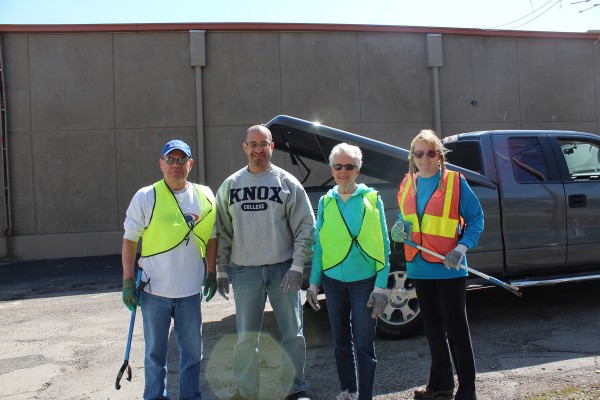 Recently, the Environmental Team was asked to reflect on their work for a publication of the Southeastern Iowa Synod of the ELCA. Here are some of their answers.

How did the team begin?
In 2010, Bill McKibben, world renowned environmentalist, came to speak at St. Paul. He spoke primarily on the impact of global warming. Following his talk, member Duane Haas approached

Pastor Peter Marty and asked if he felt we should follow up on the excitement Bill McKibben created in the congregation. After receiving an affirmative response to explore, a small group put together an informational meeting. Several church members attended and the Environmental Team was born.

What are some of the projects the crew has undertaken?
Lenten supper and special events dishes, Earth weekend, alternative transportation weekends, Make It Yours neighborhood clean-up, increased and improved recycling, coffee cup initiative.

What is the philosophy of the team?
The team strives to be a part of the everyday workings of St. Paul to reduce, reuse, and recycle – a grassroots initiative. We look to help shape the thinking of St. Paul people in areas of environmental concerns.

What has been your biggest challenge?
The biggest challenge remains broadening the scope of the Environmental Team. There is work to be done in areas such as lowering the number of cars driven to church each week for activities and for services. Other ideas might include further reduction in the waste generated by single use cups and tableware.

What has been your greatest joy?
The greatest joy is the overwhelmingly positive response of the St. Paul people. Members and staff alike are willing to step up and help in many ways.

In particular, with the involvement of staff and volunteers, the waste from the Lenten dinners went from an overflowing Dumpster to a few bags of compostable food scraps and one bag of trash.

This, multiplied by the number of weeks of the Lenten suppers, resulted in a sizable reduction in waste. We are always searching for more ways to have such an impact.