One of three times

Mile 7 of the Quad Cities Marathon. That’s the third time in her life Michelle Juehring felt like quitting.

The swim of Ironman Wisconsin. That was the second time in her life Michelle Juehring felt like quitting.

Cancer diagnosis – a really bad one. That’s the first time in her life Michelle Juehring felt like quitting.

At mile 7, her training partners were there to help her stay the course. Others joined later. During the swim, a fellow triathlete took her by the hand and centered her. During the cancer diagnosis…well, there were lots of people who helped her fight and find her way.

“One shot at life,” Michelle says, citing the Eminem song Lose Yourself.

“Look, if you had, one shot, or one opportunity
To seize everything you ever wanted. In one moment
Would you capture it, or just let it slip?”

Michelle is the beloved director of children’s ministries at St. Paul. She trained hard for the 20th annual Quad Cities Marathon, taking long runs with friends throughout the summer. But the night before, a stomach bug hit. And the morning of? It was really hot outside – a big problem for marathon runners.

Seven hours of running, but mostly walking later, Michelle finished the race. She is just one of just 18 people who have completed all 20 Quad Cities Marathons. This finish was her 23rd marathon total.

“Today, thanks to some Angels in tennis shoes, I finished my 23rd Marathon,” she wrote on Facebook. “When the wheels fell off the bus at mile 7 (yes, #@#!! mile 7) Laura Snook stayed by my side the rest of the 19 miles and wouldn’t let me quit. Pig Johnson added just enough encouragement & push so we wouldn’t be booted off the course. Joel Moore joined us at mile 20 to bring us home. Mike Locander lightened the mood by escorting us through The Wall. Rick & Laurie McGrath were my faithful training buddies all summer long. Mandy Brown set the tone for the race by reminding me of wise words of modern-day poet, Eminem, “You’ve Got One Shot at Life!” My best friend Dave Juehring made sure the kids were at the finish line for our annual picture. My wonderful coworker Joanna Roland covered me at work this morning. I’m thankful, miserable and glad I had the opportunity to test my limits once again.” 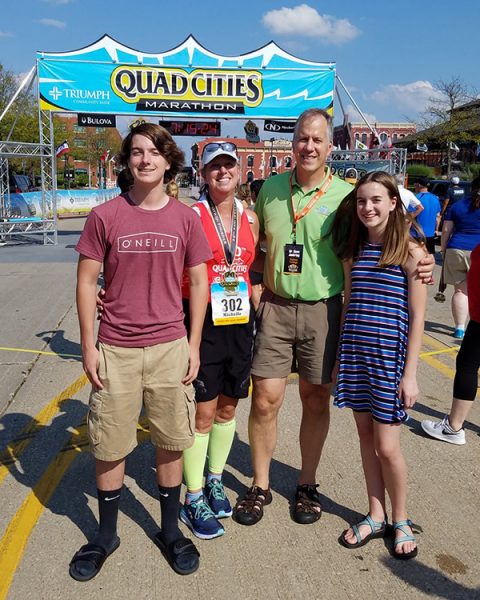 The day after the marathon, Michelle turned 50 years old. She spent the day recovering from the race. Her colleagues decorated her office to mark the occasion.

Two days after the marathon, she talked about those three times she wanted to quit – but didn’t.

Everyone who has the honor of knowing her is so very, very thankful she kept going.