A baby blue, two story, wood frame home on 20th Street in Rock Island looks like a typical home from the outside.

But take a step inside and see – up to four women and their children live there, with a house manager who helps take care of running the household. The women are there because they are experiencing homelessness, and need a place to determine the next steps of their lives.

“We are more than a shelter,” executive director Ann Ring said, noting that many of the women who come to stay at the house have trauma in their backgrounds. “We are a home.” 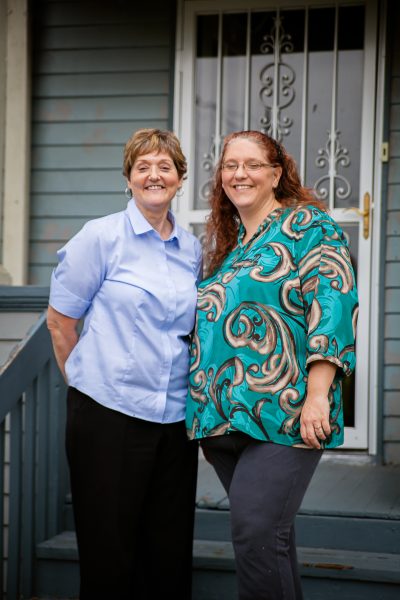 The organization is called the St. Joseph the Worker House Association, a nod to its history dating back to the 1970s. Women can stay for up to 90 days in the 20th Street house, and up to a year in a transitional housing duplex. They participate in chores, take classes, find work, and get support to tap resources as they get back on their feet.

The history of the house began in the early 1970s when Fr. Robert Reynolds, the pastor of St. Joseph the Worker Church, opened the Catholic Worker House in the parish rectory. Eventually the program moved to the house on 20th Street, operated by Chuck and Kim Trapkus. The house, then known as the Dorothy Day House, provided services for a number of years. As part of the national Catholic Worker Movement, the house welcomed anyone who came to its door.

In the late 1980s, the Catholic Worker Board of Trustees donated the property to the St. Joseph the Worker House Association, which was a corporation formed by St. Joseph Church. The mission of the house became focused on homeless women and children. The church, which closed in 2005, had a mission of social justice involvement and provided generous funding for the operation of the house.

After being closed for several years, the house reopened in September of 2006 under new leadership. In 2007 a new board was seated and became a 501c3 charity. In September of 2009, the board purchased a second home, which is located on 11th Street. In 2010 the first house was named the Martha House based on the biblical woman, Martha, who showed hospitality to Jesus.

The organization is now supported by individual donations, local church and community efforts, as well as grants and fundraising. St. Paul began its support in 2015.

Jessica Bingham is the house manager at St. Joseph the Worker. She lives there, a position that she finds quite fulfilling as she is a “homemaker at heart.” She manages the chore chart to make sure the work of running a household gets done. She helps support residents as they cook meals for each other. She also lends an ear to the women – “they come and talk with me,” she said. “This has really opened my eyes to a lot of things.”

It’s doing lots of seemingly little things that occupy her time – yet they are big things toward making the house comfortable for all.

St. Paul offerings financially support the work of several shelters in the Quad Cities, including four shelters for women and children. St. Paul’s commitment to these shelters total $22,000. Below are the additional three. Sister Mary Ann Vogel from Humility of Mary Housing will speak about her organization’s work on Sunday, Dec. 11, 10:45-11:30 a.m. in the Luther Loft.

Humility of Mary Housing Inc. (or HMHI) serves approximately 80 single-parent families with 150 children annually. It began with one four-plex building that housed four young mothers and their four babies. Today, HMHI has 49 apartments in 15 locations in Davenport. HMHI empowers, strengthens, and increases the self-reliance of single parent families who have been homeless, through supportive services and quality housing. Families live in furnished apartments, paying rent on a sliding-fee scale.

While in the HMHI program, social workers partner with parents to set goals to increase their education or job training. Families with parents suffering with brain-injury, mental health, or recovery issues also receive support of a resident site manager.

The Family Resources shelter is a place for women and children fleeing domestic violence and/or sexual assault (hotel rooms are also available for men and others who are not able to stay at shelter). It is a short-term shelter, at an undisclosed location, for what can be one of the most dangerous times in a survivor’s life.

Domestic violence is a pattern of behavior that is used to gain power and control over one’s intimate partner, and it can occur in both dating and marital relationships. The violence can be in the form of physical injury, but it may also be in the form of threats, isolation, sexual assault, and emotional abuse. Services offered include 24-hour crisis line at (563)326-9191, 24-hour emergency response to hospitals and police departments, counseling, medical advocacy, legal advocacy, housing referrals, employment assistance, and safety planning.

Winnie’s Place, which is celebrating its 10-year anniversary this month, offers free, comprehensive services to women and children. Services include: shelter, food, clothing, counseling, parenting skills, spiritual support, as well as encouragement, acceptance, and hope. At the shelter, women can focus on their mental health, chemical dependency, budgeting, time management and parenting, instead of putting all of their emotional energy towards preventing abuse. The name Winnie came from this: “Women In Need – Nurtured into Excellence.”