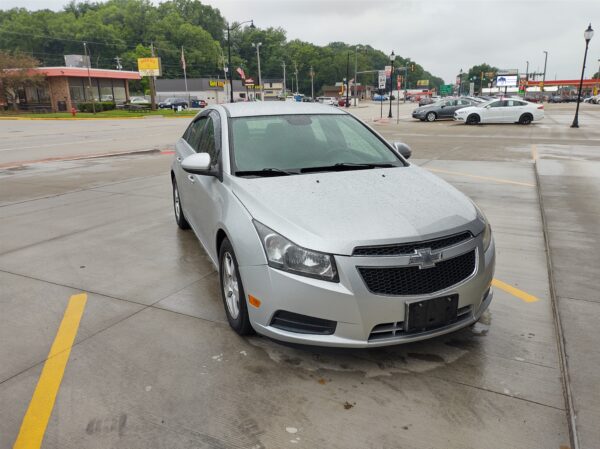 I never thought I would say this but, I’m glad I owned my Chevy Cruze.

I was 20 and had just finished my sophomore year of college. I signed up for a few summer classes at the local community college. All I needed was a summer job to save up money and everything would have been perfect. Except…I didn’t have a running car.

When I came home for the summer, my Kia Sephia started one final time before dying. It was a sad moment – the end of my first car. With the car practically falling apart, we knew we wouldn’t get much for a trade-in, so we donated the Kia to a breast cancer research foundation. If it was going away, it would leave having made an impact on someone else’s life.

While that was a touching end to my Kia, I still needed a car and that ended up being my Chevy Cruze.

Four years later, I still had the Cruze. After miles and miles of driving to and from college, Uber driving to earn extra money, and the numerous 360-mile round trip drives to see my future wife, Maddie, the car was nearing the end of its life. I had gone through so many leaks, check engine lights, and miscellaneous repairs that I decided I had had enough. I couldn’t get through an oil change interval without another part of the cooling system breaking. It was time for a new car.

At the beginning of the pandemic, I saw a commercial for Facebook groups, and out of curiosity, I started looking at the various groups. I eventually came across one for Cruze owners and enthusiasts.

I searched the group for hours. I was learning so much about my car – every available modification, repair, design flaw. This led to joining numerous car groups, even for cars that I didn’t own or intend to own. Immeasurable hours of learning, taking in as much information as I could, and annoying Maddie with every fact I learned.

I eventually began to join groups for Toyota Prius owners. After lots of investigating, I learned that these things are tanks! People race with them, go camping in them, tow trailers, off-road, and still get 50 miles per gallon. This had to be my next car.

After another year and months of searching and bugging Maddie with Prius information, I found the one I wanted. And it was local!

Now I have a car that I trust going anywhere and have yet to need to worry about anything. I’ve learned what common repairs to expect, proper maintenance, and every modification that I will most likely never do, but they were fun to learn about.

But this doesn’t really answer the lingering question: If my Cruze was such a headache for me, why was I glad to have owned it in the first place?

If it wasn’t for my Chevy Cruze, I wouldn’t have rekindled my passion for cars.

Sometimes, we dwell negatively on the situations in our lives that we perceive as “headaches.” We despise their existence in our lives. It’s not until we look back at them from a different perspective that we realize those “headaches” were blessings, waiting for the right moment to show themselves as what we needed the most in our lives.

I am sounding joy to the world for my old Chevy Cruze, all while enjoying adventures with my wife in our Toyota Prius, watching car repair videos during my lunch breaks at work, and sharing every bit of car information I can.

What was a “headache” in your life that turned out to be a blessing the entire time?

Josh Baez is an avid car and plant enthusiast from Wauconda, Ill. He currently lives in Davenport with his wife, Maddie, their houseplants, and their Toyota Prius, Dave.