It all started with a group of (mostly) musicians from the Open Spirit contemporary service. 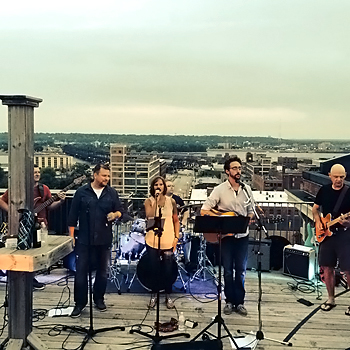 They are Ten Mile Radius. Their most recent gig? Playing on the front porch of Michelle Campbell and Bill Campbell, St. Paul’s contemporary music director, during the Quad Cities Criterium on Monday in the Village of East Davenport.

“We all enjoy making music,” said Brad, who serves as the group’s drummer and leader. “We thought it would be fun to get together more and play. We’re six people who have very different tastes in music.”

The band gets together once a week to practice. They’ve got about 100 songs on their play list – 70s, 80s, 90s, rock, country, modern. Their genre is wide: “Anything that’s fun for a party,” Brad said.

They’ve performed in a variety of places – a rooftop in downtown Davenport for a going away party, a fundraiser at the Redstone Room, get-togethers in places like Viola and Coal Valley.

So is there meaning behind the name? Nope. Totally made up. “Choosing the name for a band is a painful process. For a couple of months, we threw around names, with maybe 100 on a list. Some were silly. Some didn’t make any sense. Others were already band names. Some words just sounded good together.”

And Ten Mile Radius was born.

“We love performing for people, and just being together,” said Jamie, who sings. “We have a lot of fun together as a group. We really do. Not many people get to make music with some of their best friends.”

To keep up to date with where Ten Mile Radius is playing, visit www.tenmileradius.com.