The diaries of Adam and Eve

Christian Frieden and Carolyn Wehr are students at Moline High School. They are both super involved in the arts.

For the recent production of Grease, he was Danny Zuko, she was Cha Cha. They’ve played Romeo and Juliet and countless other roles through their work in the theater, music, and speech departments. 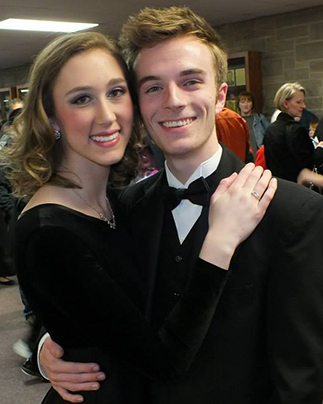 Christian is a senior. Carolyn is a junior. They also happen to be a couple.

With Christian graduating this year and making plans to attend Illinois State University to become a theater teacher, they thought it was time to put together a piece together for the regional speech competition. The hope, of course, was that they would do so well that they would make it to state.

So when Carolyn stumbled upon The Diaries of Adam and Eve by Mark Twain, she knew she found their piece. It’s a deeply moving story of the humanness behind one of the most-known stories in the Bible.

But early that Saturday morning, Carolyn got really sick. There was no way she could make the bus trip to the speech competition. No way.

They were crushed. They really thought they had a performance that would make it to the state competition, and possibly even win.

And then they realized – it wasn’t about them.

And maybe since they didn’t perform it where they planned to….maybe they could perform it in other places.

So they have. Three times, to be exact, to audiences that probably never would have seen it.

It’s been a lesson in faith for both of them, understanding that sometimes things don’t turn out how we thought they should…but turn out beautifully nonetheless.