The theology of the hammer 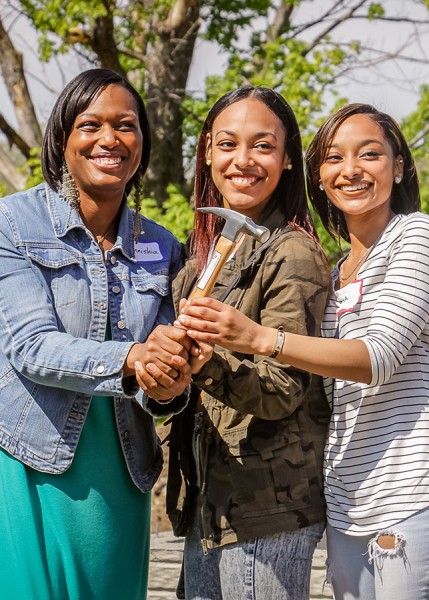 Kristi Crafton, the executive director of Habitat for Humanity Quad Cities, says it’s a shining example of people from Habitat call the “Theology of the Hammer.”

“It’s our belief that we can all put aside any differences we may have – race, religion, political affiliation, nationality, and we can all lift up a hammer to build homes for God’s children, and that’s important,” Kristi said at the groundbreaking for the two homes last weekend. “Everyone needs and deserves adequate and safe housing. Therefore we come together. We work together. Regardless of our differences, we build homes and we build futures – the theology of the hammer. This double-ground breaking is a shining example of that.”

The project that St. Paul is supporting with a donation and volunteer hours will be the home of Tannishia Garcia and her three teen daughters, Telis, Raquel, and Selina. Tannishia works full time while raising her daughters and preparing to build – with Habitat volunteer hours and classes.

Tannishia looked up other words for thank you on the night before the ground breaking, she said. But nothing, she said, could express how thankful she is.

Habitat, she said, is “blessing people all over the community, as well as my family.” The organization stands in the gap between home ownership and people who want to own an affordable place to live.

In the Quad-Cities, Habitat homes are home to 325 people, with a couple of babies on the way. They provide approximately $91,000 to the tax. Their overhead is 5.6 percent – because volunteers do so much of the work.

Tannishia’s neighbor will be Avita Hicks, with daughters Jada and Adrianne. An anonymous donor gave $60,000 and asked that the house be named after Pope Francis.

“When a Habitat house is built, the community is revitalized, hope takes root, and good things grow. That’s what we’re all about,” she said.

Signs ups are going on now for St. Paul people who would like to help build Tannishia’s home. For more information and to sign up, CLICK HERE.