A Palette of Color

As the water dances, and shoots, and gurgles, and flows, from the stone fountain at Vander Veer Botanical Park – people surely know that spring is here in the Quad Cities.

As drivers buzz by on Harrison and Brady streets, and see walkers and joggers and puppy dogs and high school track teams – they surely understand that this park is coming alive.

As the roses and the hostas and the tulips and the trees and countless other plants with names we’ve never heard of sprout from their winter slumber – they fill this park with too many colors to even think of counting, a bursting showcase of the deep diversity of this planet, wonderfully made. 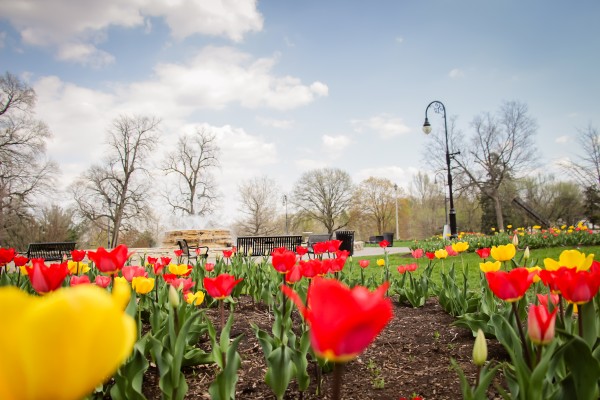 Vander Veer Botanical Park is a neighbor to St. Paul – a 130-year-old anchor in what is now a central city neighborhood. It’s a place where St. Paul Sunday school classes celebrate the end of the school year, where Vacation Bible School kids go to play, where the St. Paul Community Garden plants are started in the winter, and where anyone parking on Lombard Street for worship during the summer can enjoy the beauty of the fountain.

“It’s such a beautiful place,” said Wynne Schafer, a St. Paul member who serves as the president of the Friends of Vander Veer, the organization that raises money for and awareness of the park.

“It’s such a vital part of this city, too, an important green space in an urban area.”

In 1912, the park was named Vander Veer Botanical Park in honor of A.W. Vander Veer, who was the first secretary of the Davenport Park Board of Commissioners.

By World War I, Vander Veer Park boasted a conservatory, a music pavilion, and decorative fountains. In winter, ice skating was permitted when the lagoons froze over.

When weather conditions allowed, Davenport Park Board sponsored a Silver Skates Tournament in January, a tradition that holds today.

After a period of decline, several initiatives that began in the 1990s brought the park back to life. The lagoon was restored in 1991. The Friends of Vander Veer formed in 1992. The renovated

Grand Allée was dedicated. The fountain, once unusable, was rededicated in July 2004.

Since its beginning, horticulture has been at the core of Vander Veer.

Gardens with annual and perennial beds invite park visitors to stroll from the conservatory, through the formal Rose Garden, along the Grand Allée, and to the stone fountain at the south end of the park, across from St. Paul. Benches in the Children’s Sculpture Garden and Hosta Glade offer quiet places to rest in shade or sun.

The conservatory is known for its 100-year-old tradition of floral shows and tropical plants. Continuous displays are presented year round, including the fall chrysanthemum show, a poinsettia display, a winter azalea show, a spring floral show and an Easter lily show.

The park grounds are home to an extensive collection of trees, both native and introduced, including many trees planted during the early 1890s.

The children’s playground and lagoon area are favorite family spots for year-round activities of catch-and-release fishing and ice skating. Feeders provide grains for park visitors to feed the ducks during the spring and summer.

The park next door

Bev Smith has lived across the street from the park since 1986. She also serves on the Friends of Vander Veer.

Her favorite feature is the fountain – she can sit in her living room and watch it dance. She can see people come and walk at the park from early in the morning until late in the evening. She loves all of the blooming flowers, and enjoys crossing the street to go and sit on one of the park’s benches.

“I’ve always admired the park,” she said. “It really is a wonderful place.”

Natasha Sottos is the executive director of the Friends group. Her kids are St. Paul Preschool alumni. Her parents are Don and Patty Courter. “The nostalgia of the park is strong,” she said. “Throughout its history, it has been a big gathering spot. Grandmas and grandpas remember it, moms and dads remember it.”

Years ago, on Sundays, people would go to church, then they would promenade in the park, she said. Or, others remember skating, walking, taking the trolley to the park.