On August. 24, 1950, Jeannine Ahlgren and Darwyn VanGorp were united in marriage at the church Jeannine grew up in – the old St. Paul at 14th and Main in Davenport. They then traveled seven blocks north for their reception at the recently purchased Church House – the property that is now home to St. Paul. 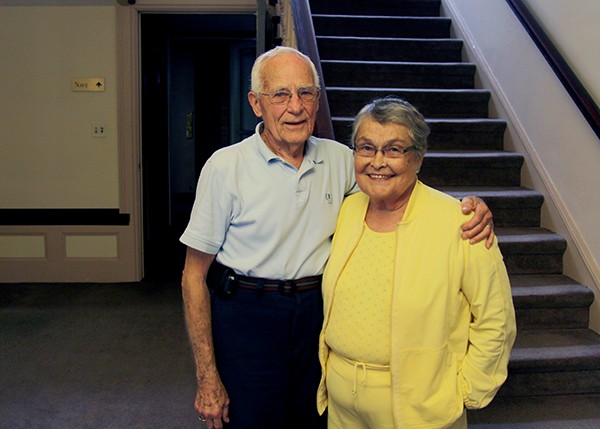 They had cake at the bottom of the grand staircase before embarking upon a life of living in several states as they traveled the country for Darwyn’s job with the Boy Scouts. She was a homemaker, and worked for the Methodist church, too.

Last week, Jeannine and Darwyn stopped by St. Paul to take a tour and reminisce. She’s been talking a lot about her hometown of Davenport for the past six months or so, Darwyn said. Some memory problems are starting to set in, so the couple decided that this was the time to come and see the places that were so important to her in her growing up years.

“This is a nostalgia trip,” Darwyn said.

The parents of five, they drove from their home in a retirement community in North Carolina to Davenport for a few days last week.

On their agenda was Vander Veer Park, where Jeannine ice skated as a child. The Mississippi River was on the list, too, as was the old Davenport High School (now Davenport Central), and Jeannine’s old neighborhood of wood frame, two-story houses in the 500 block of East Rusholme Street.

Jeannine recalled that her dad set type at the old Davenport Democrat newspaper, and that at St. Paul, Pastor Emerson Miller was “an amazing pastor.”

At St. Paul, they saw the new Sanctuary, the Chapel, and the Church House. They stopped to take a photo at the stained glass windows that were once in the old church at 14th and Main.

Their last photo was at the base of the stairway in the Church House – where they ate cake 65 years ago, almost to the day, and began their life together.