Eight months after a fire claimed their husband, father, and grandfather, the Lamp family is finally back home.

Deb Lamp lost her husband of 46 years, Glen, in a fire on May 10. She and her son, Steve, and grandkids, Trever and Tyler, stayed in four different places – three hotels and one condo – while contractors fixed the physical damage done by the middle-of-the-night fire.

Deb was at work shortly after midnight on May 10 when her grandson Tyler called. Her first thought was “why aren’t you asleep?” Then Tyler told her that a fire had started and that Glen was trapped inside the house. Trever had tried to rescue him, but Glen told him “Go wake everyone else up. I love you.”

Deb left work and drove home, where she found the road blocked with police cars, ambulances, and fire trucks. By then, firefighters had gotten Glen out of the house. She was able to see him before the ambulance took him away.

While some parts of the night are hard to remember, she vividly recalls: “I knew he was gone when I saw the ambulance leave without any sirens.”

The support shown to the family started that very night in the emergency room, Deb said. “All we had were the clothes on our back.” It continued as crews took all of their things away for cleaning and the house was taken down to the studs to rebuild. The family also lost three pets.

“Our life will never be the same, we’re missing an important piece, but we’ll move on,” she said.

Now, the family is slowly unpacking the items that were salvaged – thankfully more than what Deb ever dreamed could be. A few of Glen’s items hold special meaning. “I wasn’t sure I was to have anything of his, but I do.”

On their front porch is a stone with the Serenity Prayer. It’s been an important prayer for Deb for years, but now moreso than ever. 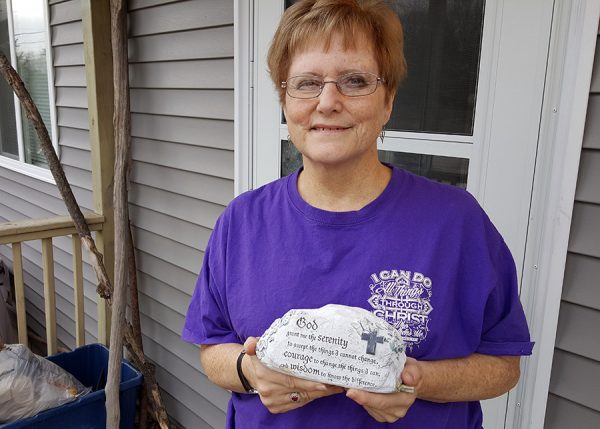