A birthday party is what started it all.

Several years ago, Mary Nuernberger attended a birthday party for one of her friends at a local horse ranch. She got a coupon for a free lesson, went for that lesson, and found that it was something she really liked to do. What no one expected was that it would ignite an interest for her mom, Joyce.

Today, Mary still likes riding, but has other interests, too. Joyce, on the other hand, spends time six days a week at V2 Reining, a training arena north of Davenport off Utica Ridge Road.

“At first, I held on so hard to the saddle that I got blisters,” Joyce said with a chuckle. And now? She’s a competitor. Joyce and her horse, Jake, scored a personal best score in July. They won a plaque at a competition in August. 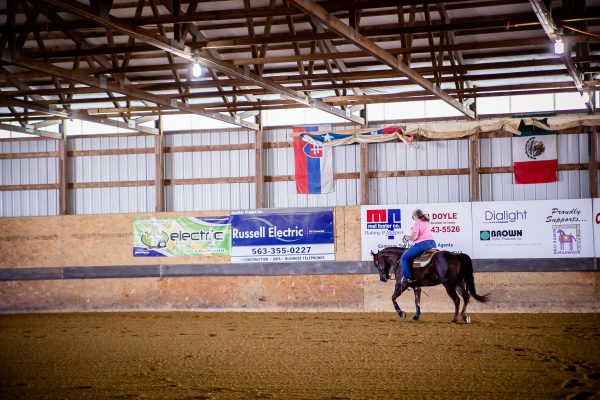 Joyce started riding in 2008. The first step in her training was getting over the fear that caused her to hold on to that saddle so hard. Slowly, she learned how to relax into riding, balance herself well, and give cues. Joyce clucks to encourage Jake to trot. A smooch gets him into a lope. Whoa, of course, means stop. Then it was on to learning circles and sliding stops – the type of stop where the horse slides on its hooves until he or she comes to a standstill.

Slides are a bit of a heart-stopper, especially when done while approaching the gated end of an arena.

“Reining pushes me out of my comfort zone,” Joyce said. “It’s helped me grow personally. I get to set and make goals.” 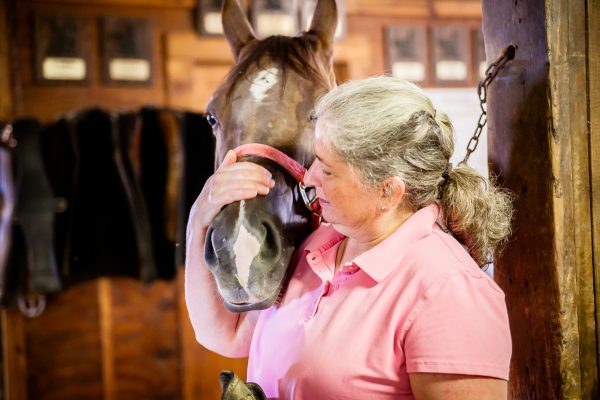 Joyce started competing in 2010 – when she was 47 years old. She notes that she was a city girl growing up, though she did “have a teenage crush on horses like a lot of kids have.” But she
never consistently rode. She credits her family, including husband Dave, for giving her the time to pursue riding, and her trainer, Mike Davis, for his expertise. Joyce travels to approximately two shows a month, from March-October, mostly in the Midwest, to compete.

She’s only fallen “one and a half ” times, she said. One was a full fall, the other was more of a not-so-graceful slide off the horse. 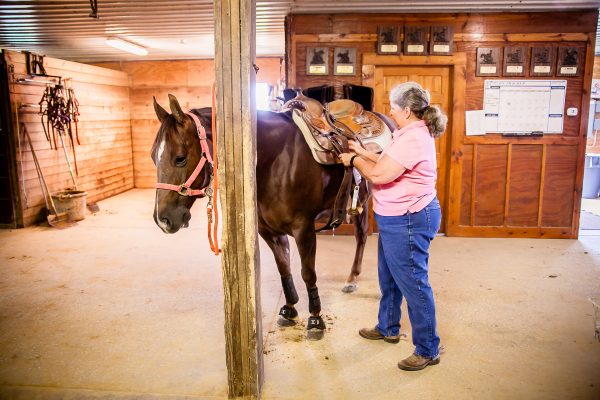 On a recent sunny day, Joyce led Jake from his stall to the arena as WLLR-FM played a country song in the background and Jake swatted away flies with his tail. Jake is a Quarterhorse, about
15 hands high. She brushed him down, picked debris from his feet, chose a bridle, and put on his saddle. Many times, she braids his tail so it doesn’t get in the way while riding. Joyce’s gear includes cowboy boots and hat, spurs, and blue jeans.

She hopped up on Jake to practice some of their skills. And the dust started flying as they made their way up and down the arena – sliding stops and all. 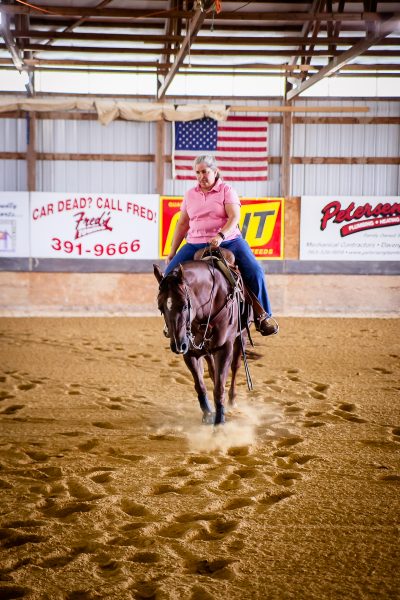 What is reining?
Reining is a specific type of riding that involves completing set patterns within an arena. Each pattern includes slow circles, large fast circles, spins, and sliding stops, among others. Riders and horses compete at different levels, from those who are just starting out to professionals. Approximately 15,000 people are members of the National Reining Horse Association. Competitors ride in more than 1,200 shows a year.