The symbols of Christmas 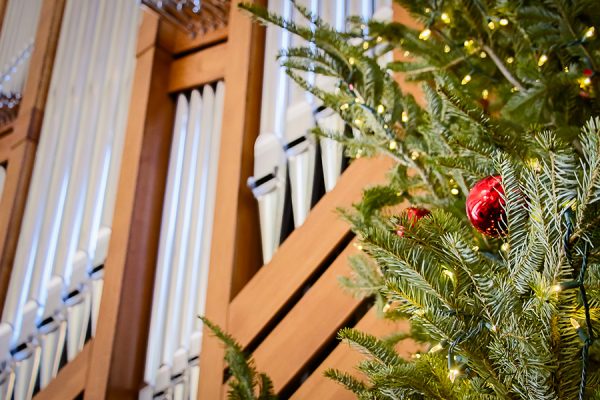 The Christmas spirit comes alive each December at St. Paul, with objects,sounds, and sights. Here, we share some of the items that hold specialmeaning or stories for this most precious season.

The organ case stands nearly 36 feet tall at the highest tower. From pencil-sized pipes to the soaring 16-foot “Low C” pipe in the organ facade, the pipes number 2,335. Materials from all over the world combine for musical excellence. Two keyboards, crafted of bone and ivory, originated in England. Metal pipes were built in Holland. Reed pipes came from Germany. The artisans of M.L. Bigelow & Co. of American Fork, Utah, custom-designed the distinctive asymmetric case and the instrument’s fine musical qualities. It is Bigelow’s “Opus 33,” the thirty-third instrument crafted by the company.

It was conceived and constructed over a two-year period in their Utah workshop. The pipe organ was dismantled for its cross-country journey to Davenport, aboard two 53-foot semis. It was then meticulously rebuilt and voiced on site.

The mechanical-action tracker organ is constructed with 44 ranks and 43 stops (with 37 independent voices). Each manual keyboard is constructed of 61 notes, with 32 notes on the pedal keyboard. The metal pipes are made of tin, lead, and zinc. The wooden pipes are oak and poplar. The longest pipe stretches to 16 feet. The shortest is a mere three-quarters of an inch.

The finely-polished cabinetry is crafted of quarter-sawn white oak. Surrounding the keyboards is cocobolo, a beautiful wood of Central America. A visible star-like feature is mounted high on the organ. When this zimbelstern (or bell star) is played, eight bells make a continuous tinkling sound – a festive and surprising accent to worship.

The organ is driven by electric stop action, with state-of-the-art digital memory. Two video monitors, connected to closed-circuit cameras, provide the organist with a view of the Sanctuary and choir director.

What is your favorite Advent or Christmas hymn? Advent hymns center on the hopefulness of the arrival of the baby in a manger.

People, look east.
The time is near of the crowning of the year.
Make your house fair as you are able,
trim the hearth and set the table.
People, look east, and sing today –
Love, the Guest, is on the way.

The last hymn played at the end of the fourth Sunday of Advent at St. Paul is Joy to the World. It’s often considered to be the transition hymn between Advent and Christmas.

“Joy to the World was not written for Advent or Christmas,” according to the Hymnal Companion for Evangelical Lutheran Worship. “It is the second half of a paraphrase of Psalm 98, from the Psalms of David (1719) by Isaac Watts. In the Lutheran Book of Worship it stood as the first Christmas hymn. Here (the red hymnals found in St. Paul pews), it stands as the last one for Advent.

The hymns and carols sung at Christmas are imprinted on our hearts and minds. They are sung through the 12 days of Christmas, until Epiphany.

The first Noel the angel did say, was to certain
poor shepherds in fields as they lay;
In fields where they lay, keeping their sheep,
on a cold winter’s night that was so deep.
Noel, Noel, Noel, Noel!
Born is the King of Israel.

Two live Christmas trees from Timber Creek Tree Farm arrive the first full week of December. Matt Spencer, St. Paul’s custodial manager, chose this year’s trees on a beautiful fall sunny day. He says when he saw one of them, he heard angels singing. “It’s absolutely beautiful,” Matt said. That one is about 30 feet high – the tallest tree St. Paul has ever had; the other is 26 feet high.

Once the trees are up in the Sanctuary, thanks to the help of many hands, approximately 3,500 lights go on to each of the two trees, as well as about 30 satin and shiny red bulbs. A rented mechanical lift makes it all possible. It takes a few days to decorate. The trees shone brightly by the second Sunday of Advent, Dec. 9, just in time for Choral Advent at 9 a.m. worship.

A few years ago, the Davenport West High School welding class built a hinged tree stand (to make raising the trees easy). They built another one this year. Andy Zinn teaches the class. “The trees mean a lot to me, because they mean a lot to others,” Matt said.

It’s a goosebumps-type moment toward the beginning of Christmas Eve worship, when the worship assistants and pastors in white robes descend from the front of the Sanctuary.

With organ music, candles, the processional cross, and the large lectern Bible held high for all to see, they process up the center aisle to the middle of the Sanctuary. It is there that the Bible opens for the reading of the birth of Jesus Christ.

In those days a decree went out from Emperor Augustus that all the world should
be registered. This was the first registration and was taken while Quirinius was governor
of Syria. All went to their own towns to be registered. Joseph went from the town
of Nazareth in Galilee to Judea, to the city of David called Bethlehem, because he was
descended from the house and family of David. He went to be registered with Mary,
to whom he was engaged and who was expecting a child. While they were there, the
time came for her to deliver her child. And she gave birth to her firstborn son and
wrapped him in bands of cloth, and laid him in a manger, because there was no place
for them in the inn.

The Bible, purchased two years ago to replace a many-years-old one, is from Cambridge University Press. Cambridge published its first book in 1584, making it the oldest publishing house in the world. The edge of the Bible’s pages are covered in gold foil.