A year in Spain

It was the scariest thing she’d ever done. And then it was one of the best.

Last year, Tegan Hoover decided to spend a semester in Spain. She packed up her things and flew to Europe to be a part of her college’s study abroad program, living with a host family in Granada. It’s where a 10-minute trip can end at the mountains or the beach, where some of the most incredible examples of medieval architecture can be found, as well as a hilltop fortress known as the Alhambra, with palaces, patios, and pools.

Tegan had a rough transition, missing her mom Leigh and sister Jenna and the comforts of speaking her native language. On a particularly rough day, her host mom, Bernardita, took out her Bible and read to her: “Porque por fe andamos, no por vista.” It’s 2 Corinthians 5:7,  “for we walk by faith, not by sight.” It’s now tattooed on Tegan’s foot. 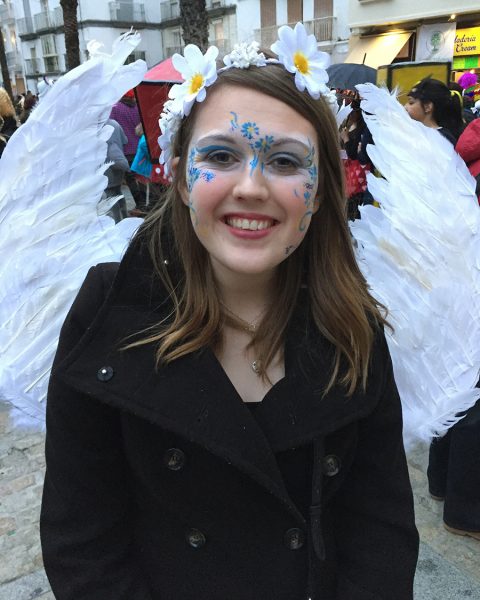 But then she settled in. Her Spanish-speaking skills grew, she had the chance to travel to places like Morocco, and took classes with professors who captured her imagination. She started to bond with her host family, experiencing their Catholic Mass, daily late-afternoon lunches and siestas (where the entire town shuts down), and festivals that involved vibrant costumes. She loved the slower pace, the social nature, and the kindness of people in Granada. “Everyone was so kind, especially to someone who was learning their language.”

Tegan thought she would come home for good at Christmas. Then her adviser said, “You can stay in Spain for another semester if you’d like.” Tegan did come home for Christmas, but then she returned to Granada through May.

“I grew up so much while I was there,” she said. “I cried when I left. I came out of the past year so changed.”

This week, Tegan is heading to St. Louis University, to complete her final two years of college as a triple major – Spanish, international studies, and political science. She hopes to work internationally, perhaps for the U.S. Department of State or for an organization working overseas.

And she’s thinking about grad school – perhaps in Spain.