From butterfly to cyclone

One of the really cold nights this week, Joanna Roland received a phone call.

“Miss Joanna?” the voice on the other end of the line said. “It’s Tyler.” 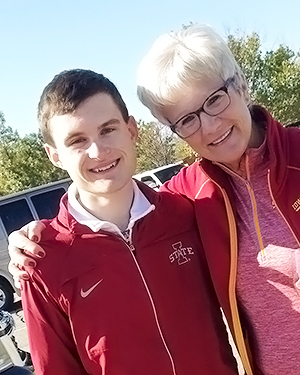 The first time Joanna met Tyler was when he was about 4 years old. She was at the very beginning of her career as the preschool director at St. Paul. He was a student in the preschool, in the Butterfly room. He was playing in the kitchen, and he invited her over for a make-believe cookie.

As she sat down, he said, “So tell me about yourself.”

Today, 15 years later, Tyler chuckles at the memory. “I spent time growing up with my grandmother and her friends. I think that’s where I got that from.”

Tyler is now a freshman at Iowa State University. He wants to be a high school English teacher someday. He and Miss Joanna went to lunch this week to catch up on how he’s doing.

Over the years, Tyler has kept in touch with Miss Joanna. His mom, Chris, works in the preschool.

“I would be a guest reader in my mom’s preschool class and I would stop by Joanna’s office to talk,” he said. “When I was looking for colleges, she suggested I check out Iowa State. I went, and as soon as I walked through the gate, I felt like I was at home.”

Joanna happens to be a rather loyal Iowa State Cyclones fan.

So when Tyler went off to school, Joanna put together a package of household items for Tyler’s dorm room. She invited him to come to tailgate with her family before a football game this fall.

Tyler is working as a tutor at an elementary school in Ames.

And the next generation of educational leader is born.

“It’s very rewarding to me. When they come up to me and want to hug me, I know that I am doing something meaningful,” he said.