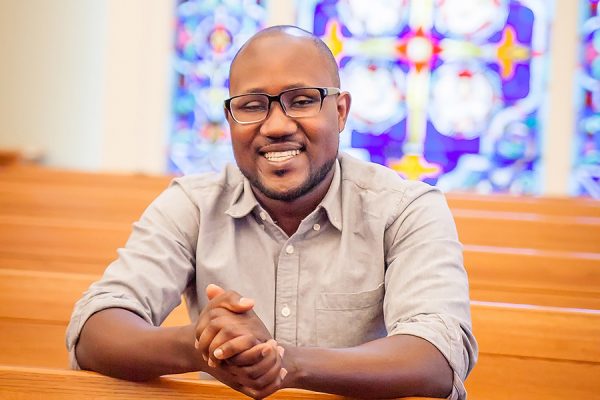 In the village of Masaka, Denis Ssempala lived with his father, mother, and two siblings – a younger brother and an older sister. Their home was a simple one, without running water or electricity. He remembers feeling loved and listened to, especially by his father.

Then, his mother died.

And then his father.

“When we buried my father, I remember leaving that place,” Denis said. Family members fought over who would take the children, and finally, Denis’ maternal grandmother won out – but only temporarily when it came to Denis. “My grandmother tells me this story and she cries.”

Denis ended up spending most of his childhood with his paternal family – a life of abuse, neglect, and hardship. “It was punishable to lose a pen, to lose a book. I was once given a piece of ground to dig for a day because I lost a pen.”

“I became a parent to myself,” he said. “One of my maternal aunties once visited me. The only advice she gave me was ‘learn to be quiet.’ From that day, I changed.”

Maybe you’ve seen Denis around St. Paul – he joined in August. He speaks Luganda and English. He is a Muganda (tribe), from the Ffumbe clan. With a desire to learn, a high level of persistence, and intention to help others, Denis now lives in Davenport. He is studying nursing at Scott Community College, one of several international students enrolled at the school. He lives across the street from St. Paul in the home of a physician who leads a nonprofit that works in Uganda, and supports the education of Denis and others.

School became an escape for Denis as a child. “At school, I was happy. I made sure to make friends at school.” He attended a school that was crowded and not well-funded. His paternal grandfather turned down an opportunity for Denis to attend a more resourced school, giving the opportunity to Denis’ step-brother instead.

Nevertheless, Denis passed the exam required to graduate from primary school and continue his education. He eventually moved to Kampala, the capital city of Uganda, navigating difficult family situations that continued to impact him.

“I was as bitter as any human being could be, until Charles came in,” Denis said. “Charles started paying for my high school. He was paying tuition for a number of kids.”

Charles is Dr. Charles Holt, a physician from Davenport. He began traveling to Uganda on a medical scholarship from Yale University. He and a group of others founded Caring Hands Foundation in 2009, an organization that offers spiritual, social, educational, medical, and economic support to people in Uganda. The organization supports churches, educational scholarships, the construction of school buildings in remote villages, and medical care through a hospital in Kampala and mobile clinics in rural areas.

Denis went to university in Uganda, where he started to study business computing. However, he had never had access to a phone or computer, so that made his studies difficult. The difficulty was compounded because others in the class had had access as they grew up.

“Sitting at the computer was a beautiful challenge for me,” Denis said.

His hard family dynamic continued, and Denis sometimes relied on friends for food. Yet, he persisted. “Negative statements should not be depressing,” he said. “They should be an encouragement.” Some of the statements he heard from family? You’ll never be anything. You cannot do that. You are not smart.

Denis started working in a hospital. He really enjoyed it. “I loved working directly with people on a caretaking basis,” he said. “I feel so comfortable doing medical work.”

He decided, with encouragement from Charles, to apply to study nursing in the United States. Scott Community College accepted his application. He arrived shortly before Christmas 2017. Denis, now 28, does miss his paternal grandmother and his younger brother in Uganda. However, “people ask me if I miss home. I don’t think I miss home.”

Denis is working on an associate’s degree in nursing. He hopes then to pursue a bachelor’s degree, and perhaps more – maybe something along the lines of becoming a physician assistant. “I have high hopes for my academics,” he said.

About Uganda
Uganda is in East-Central Africa. It is bordered by Kenya, South Sudan, Democratic Republic of the Congo, Rwanda, and Tanzania. Uganda also lies within the Nile River basin. Beginning in 1894, the area was ruled as a protectorate by the UK. Uganda gained independence from the UK in October 1962. The official languages are English and Swahili. Luganda is a common language; other languages include Runyoro, Runyankole, Rukiga, Luo, and Lusoga.