The shift downward began years ago. First came the change from incandescent to CFLs. Now, the switch from CFLs to LEDs is underway.

It’s a lot of letters that are adding up to a lot of savings.

St. Paul building staff are halfway through the most recent change out of lighting fixtures and light bulbs to increase efficiency and decrease cost. To reduce the cost of the installations, the church applied for and received thousands of dollars in rebates from MidAmerican Energy.

“We have a payback of two years,” said Matt Spencer, custodial manager. He is working on the project with Todd Byerly, director of operations. 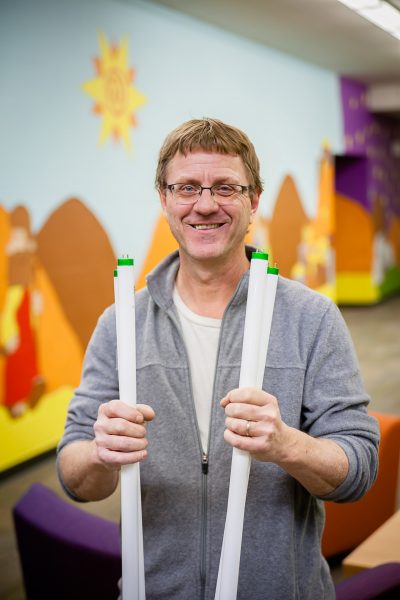 St. Paul took advantage of MidAmerican Energy’s Commercial Energy Solutions program, had an assessment, and updated insulation in the Education Wing and lighting to LEDs throughout the building. The congregation spent a total of $12,860 and received rebates of $9,202.

Additionally, St. Paul qualified for a bonus rebate of $1,086 since the congregation completed three separate projects. With the bonus, the out-of-pocket cost for St. Paul after rebates was $2,572, making the projects pay for themselves after a little over two years.

The idea is this: When individuals and organizations use less energy in daily life, it reduces reliance on power produced at fossil-fueled plants, leaders from MidAmerican say. It allows power companies like MidAmerican the ability to supply more clean energy.

The letters of lighting can be a bit confusing. Here’s some history, from Energy Star.

Incandescent lights are the smooth round lightbulbs that people had in their homes for many years. They produce light using electricity to heat a metal filament until it becomes “white” hot or is said to incandesce. As a result, incandescent bulbs release 90 percent of their energy as heat.

CFLs are the newer light bulbs that look like a spiral. In a CFL, an electric current is driven through a tube containing argon and a small amount of mercury vapor. This generates invisible ultraviolet light that engages a fluorescent coating on the inside of the tube, which then emits visible light. CFLs need a little more energy when they are first turned on, but once the electricity starts moving, CFLs use about 70 percent less energy than incandescent bulbs.

The change, just from CFLs to LEDs, means a decrease from 160 watts used per fixture to 27 watts, with a much brighter light and less heat – on top of less cost.