Is poverty a sin? 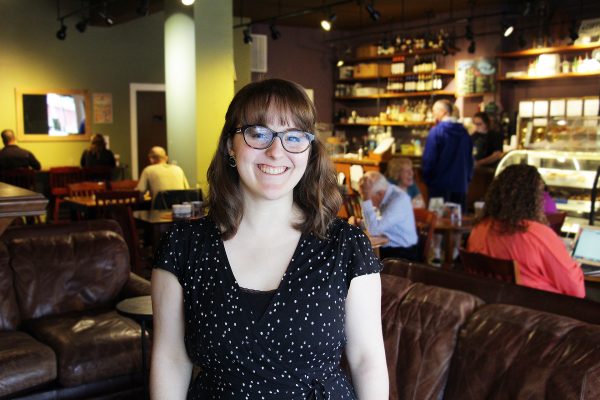 Editor’s note: Hannah Griggs is a senior at Augustana College. She recently presented at the college’s Symposium Day. This is an excerpt from her work.

On the way home from a youth group trip during my sophomore year of high school, our St. Paul Lutheran church minivan passed by a person on the side of the road. Begging for money or food, the middle-aged man held up a cardboard sign for passersby to see. As we approached, our youth pastor asked if we should stop. Feeling unsure, a few of us said yes. I hopped out of the van with a
couple of other kids to give the man a banana, a granola bar, and about $10. Thanking us, he told us that his name was James Parker, and he asked us to pray for him.

A friend of mine was angry. “Why should we enable his laziness by giving him our hard-earned money? What if he buys drugs or alcohol?” While I understood her concern, her anger confused me. I had never heard of Jesus refusing to give money or food to the poor. For the past six years, I’ve been trying to figure out where my friend was coming from. I began to realize that her perspective is summed up in the work of Max Weber, a sociologist who examined what he calls “The Protestant Work Ethic.”

The Puritans thought that being lazy was a sin. You’ve probably heard the adage: “Idleness is the devil’s play thing.” Idleness dishonors God, so the Puritans believed that hard work would prepare them to receive God’s grace – that is, if God had elected them.

The narrative of the Protestant Work Ethic continues to influence Christians and Americans today. If only the poor chose to work for God’s glory instead of standing on the side of the road in idleness, and if only the poor spent their money on God-honoring possessions, then poverty might cease. Giving to the beggar rewards idleness. It is not only seen as unwise, but sinful.

Last spring, I did an analysis of a local pastor’s sermon series on money management to see if elements of Weber’s thesis rang true. I used the theoretical framework of narrative analysis as described by Sonja Foss and Walter Fisher. The pastor diagnosed the problem of poverty as a spiritual failure: “If there’s something wrong with the way you handle your money, then
there is something you’re doing wrong with your heart.” Overtly linking individual actions, money management, and morality, the pastor framed the cause, the consequence, and the potential for a
solution as the fault and duty of individual, moral actors.

I argue for a new conception of sin that recognizes both individual and communal contributions to sin and works for in-the-world salvation. Rather than framing Christian discourse
concerning wealth and poverty by considering the cause and solution to poverty in the context of the personal lives of individuals, Christians should adopt an alternative narrative that imagines salvation in the context of community.

I recently noticed just how easily I – a white, middle class, educated woman – avoid contact with poverty when I was riding the public bus. I realized I’m not used to traveling with strangers. I own a car, which prevents me from interacting with poverty in the ways that I did while riding the bus. Carrying large backpacks, blankets, and coats, many of my fellow passengers appeared to live in poverty.

How can democratic discussion of wealth and poverty flourish in this highly individualistic, homogeneous economic and social environment? If Americans want to improve our democracy, we must also facilitate friendships with people of diverse economic situations. The dichotomy that Weber theorizes, where good Americans/Christians work hard and therefore become wealthy and bad Americans/Christians are lazy and succumb to poverty, subverts both the task of democratic tolerance and the Christian task of loving one’s neighbor, while restraining both individual
and societal forms of sin.

If Christians want to love others, we must facilitate friendships with people of diverse economic situations. In order to enact the social change we hope to see, Americans and Christians must reframe our discourse concerning wealth and poverty. We must expose societal sin, recognize institutionalized oppression, redistribute power, and facilitate dialogue between people of diverse economic backgrounds.