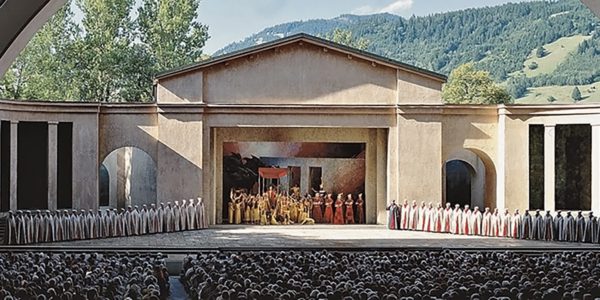 Register for the trip.

See the full itinerary and costs.

“Passion” is a fascinating word. Long before it was a perfume, it started life in Latin and meant “suffering.” Since the medieval period, its original meaning has been applied specifically to Jesus’ suffering, so that we speak of “Christ’s Passion” and observe “Passion Sunday” at the beginning of Holy Week. As it moved through French to English, passion came to refer also to any strong emotion that one experiences or suffers, which may give one an intense focus or drive.

Each of these meanings – drive, suffering, and Christ’s final journey – will offer opportunity for learning and reflection on a trip that St. Paul teaching pastor Peter A. Pettit will lead in early August.

The Passion of Martin Luther
Martin Luther’s passionate drive was for the clear preaching of the good news of God’s forgiving grace and love in language that all could understand. It set him at odds with the pope and emperor and led to the Protestant movement within western Christianity.

Travelers will visit key sites of Luther’s 16th-cenutry life and work. He was declared an outlaw of the empire in Worms, hidden in the Wartburg Castle in Eisenach, where he translated the Bible into common German, and he taught and preached at the University of Wittenberg. Born in Eisleben in 1483, he also died there on a visit in 1546. His early training as a monk took place at the Augustinian monastery in Erfurt.

The meaning of Luther’s work for German national identity and the shaping of modern Christianity come into focus in a seminar with a leading German theologian and in discussions led by Pastor Pettit.

The Passion of European Jews
One unfinished piece of reforming the Christian church that remained after Luther’s time is the painful and sometimes violent rupture between Christians and Jews. Despite suffering and being persecuted under a Christian portrayal as stubborn, unbelieving, and degenerate, European Jews have sustained their faith and life as the people of God for more than 2,000 years.

The great Jewish philosopher Martin Buber reflected on Jewish-Christian relations in Worms, where the reconstructed synagogue of the magisterial 11th-century scholar, Rabbi Shlomo ben Yitzhak, stands. Nearby is Heppenheim and the headquarters of the International Council of Christians and Jews, located in the former Buber family home. Leipzig holds the fascinating intersection of the St. Thomas church where Johann Sebastian Bach was organist and the largest Jewish community in central Germany. Its 19th-century Brody synagogue is a recently-restored example of a classic form. In Prague, Czech Republic, stands one of the most extensive Jewish communities remaining from the days of high Jewish culture in medieval and early modern Europe.

Near Munich, Germany, in Dachau, stands the memorial site of the first Nazi concentration camp, with a design and exhibitions developed by surviving prisoners. Presentations by local Jewish and Christian leaders will offer perspectives on the history and contemporary dynamics of Jewish communities and Jewish-Christian relations in this part of Europe.

The Passion Play of Oberammergau
Since 1634 the Bavarian Alpine village of Oberammergau has presented the story of Christ’s final journey. The 5,000 villagers produce it every 10 years to fulfill the vow made by their ancestors when they prayed for relief from the 1633 plague and saw God’s grace in their survival. As a spectacle and religious experience, it has been the model for dozens of passion plays around the world, including famous ones in Bloomington, Illinois: Eureka Spring, Arkansas: and Spearfish, South Dakota.

The play became notorious in the 20th century as an example of unreflective anti- Jewish attitudes. Beginning in 1990, the current director, Christian Stückl, has gradually transformed it into a more authentic presentation of the Jesus’ life and death, caught in a recognizable power struggle between Jewish and Roman authorities in 1st-century Jerusalem.

From that presentation also emerges the deep spiritual meaning of the story for Christian life and faith. The play will bring this journey to an inspiring conclusion with its 5-hour performance (with a 3-hour intermission for dinner!). The travel group will also meet privately with director Christian Stückl and one of the two actors who portray Jesus, and enjoy a behind-the-scenes tour of the playhouse complex.

About the trip leader

Peter Pettit, St. Paul’s teaching pastor, is a leader in Christian-Jewish engagement, including the programs of the International Council of Christians and Jews. He is currently part of an advisory group to the Oberammergau Passion Play. Prior to the trip and along the way, he will lead learning about the sites, history, spiritual opportunities, and theological significance of the places, people, and ideas that travelers encounter. As noted, several guest presenters will also be highlighted at key places. The journey is designed to include encounter with local Christians and Jews as well as to provide some leisure time for individual exploration.