Sometimes, it’s an ice cream kind of day by 9 a.m.

St. Paul member Kristin Burns is the quality control manager for Whitey’s Ice Cream, the iconic Quad Cities sweet treat company. And yes, that means taste testing at all times of the day. 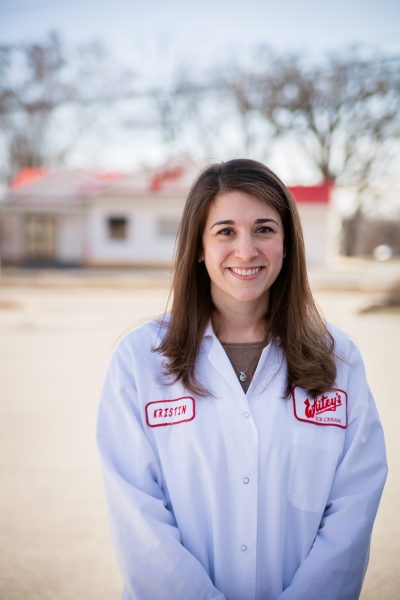 She spends her work hours in the company’s manufacturing facility, where every single tub of ice cream, topping, baked good, and filling is made for the company known for its red and white stores. She is surrounded by stainless steel equipment that churns, bakes, and packages. She walks among stacks of product in a freezer that is kept at 20-below-zero degrees year-round.

“I love hearing people’s stories,” Kristin said. “Ice cream is such an emotional food – people celebrate with it, or have some when things aren’t going so well. The stories give us a chance to step into their lives a little bit.”

But beyond the emotion, there’s a lot of science, food safety, and thought that goes into making ice cream, she said. 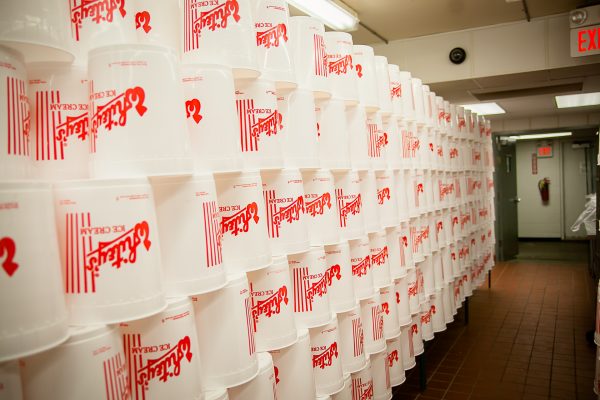 A little bit of history
Whitey’s Ice Cream was established in 1933 in Moline by Chester “Whitey” Lindgren, who received his nickname due to his white-blonde hair. In 1935, Whitey hired Bob Tunberg at the age of 15. Over the years Whitey and Bob became close friends. Bob and his wife, Norma, purchased Whitey’s Ice Cream in 1953.

During the day, Bob and Norma made the ice cream. At night, they worked in the store, on 16th Street in Moline. Their sons, Jeff and Jon, joined the business when they were old enough and started picking up trash in the parking lot before they went to school each morning. Today, Jeff and Jon serve as co-owners. The title of president remains vacant to honor their father, who died in 1991.

Whitey’s Ice Cream remained a one-store business until 1977, when a second store and larger manufacturing facility opened on 41st Street in Moline. Stores opened in East Moline and Rock Island in 1982. Whitey’s opened its first Iowa store in Bettendorf in 1984. The company now has 10 stores and is available in grocery stores across the Midwest. 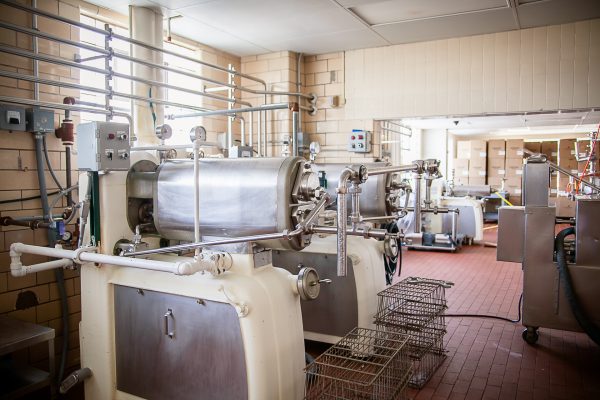 Love and ice cream
Not only is Whitey’s Kristin’s workplace, it also happens to be where she met her husband, John, while on internship during college – a Whitey’s romance, she said. Kristin studied food science and chemistry in college, and went to work for another ice cream icon – Blue Bunny in LeMars, Iowa, right out of school.

Then, an opportunity came to return to the Quad Cities and work at Whitey’s. She’s been there about six years. Her husband also works in the food industry – with a Coca-Cola distributor.

She thinks about the appearance, flavor, and texture of the ice cream – the foundation is the ratio of milk, cream, sugar, and air (Whitey’s has very little air). She also is involved in developing new flavors and new products, and manages the company’s bakery.

So what’s her favorite kind of ice cream? Chocolate peanut butter revel. Which flavor could she leave behind? Black walnut. Does she ever get tired of ice cream? Not really.

“I’ve always liked ice cream,” she said with a smile.