On a recent sunny day, Margaret Lindquist walked through the house that will soon become her home.

“The natural lighting was really bright and beautiful,” she said. “It felt so good in there. The kids are very excited to have their own bedrooms. It just really means a lot. I had a really good feeling today.”

Margaret, her partner Ryan Zettel, along with 13-year-old Mercedes, 11-year-old Miley, 10-year-old Megan and 3-year-old Theo (and their adorable pets), will move into the house the first weekend of March. The transformation is nothing short of breathtaking. Abandoned for well over a decade, the house is the first of what St. Paul hopes will be a long-term effort to transform empty houses into affordable homes in the city of Davenport. It’s in partnership with One Eighty, an organization that provides work opportunities and stabilization for people who have struggled with addiction and other challenges.

Last fall, St. Paul people hauled three Dumpsters full of trash out of the house. Over the winter, One Eighty crews gutted and rebuilt the inside, with some specific needs filled by St. Paul people (heating, for example). St. Paul people returned in January to paint the interior walls. One Eighty put on the finishing touches over the past few weeks.

“We believe safe, secure, and affordable housing is a fundamental need in order for people to succeed,” Pastor Katy Warren said. “St. Paul is committed to both investing in the people of this neighborhood, as well as working for more affordable housing options in our community.

“Our faith tells us that what has the appearance of death or destruction, with God’s help has the potential to be turned into life and new beginnings. What a gift to this neighborhood to take a house that was close to being demolished, and restore it to be not only useful but beautiful and teeming with life. It’s a resurrection story.” 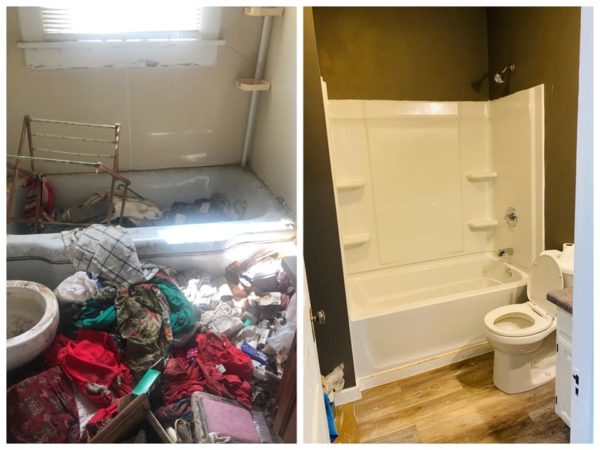 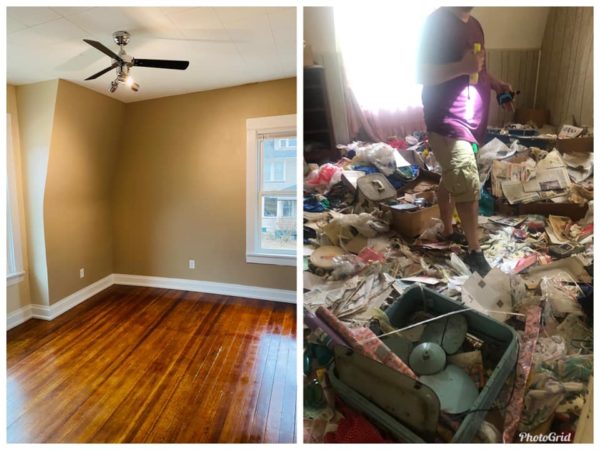 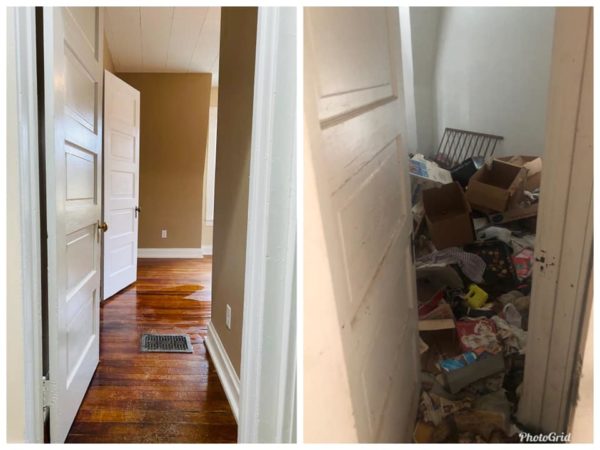 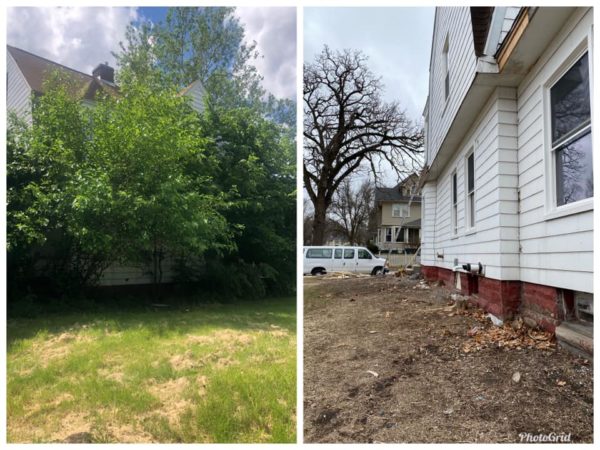 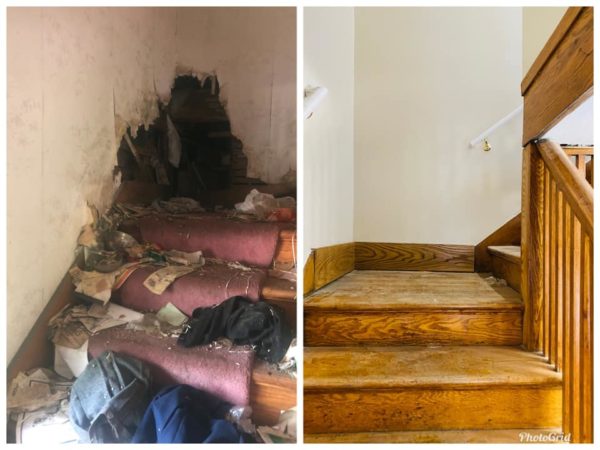 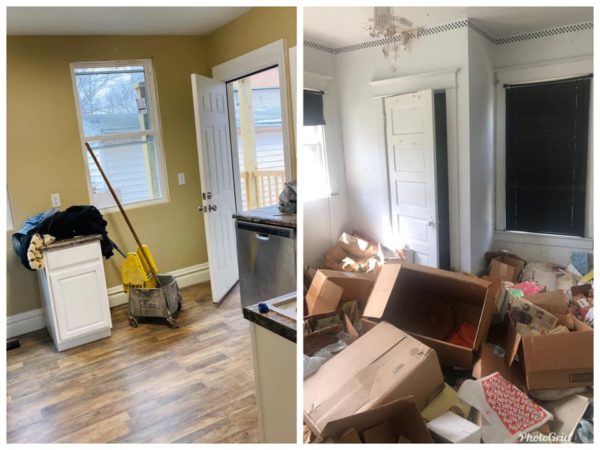 The partnerships in this effort run deep. St. Paul has partnered with Madison Elementary for several years in a variety of ways – from tutors to leading a food pantry for the school’s families. The school’s principal has articulated that increasing the number of families who have the opportunity to own their own homes in the neighborhood would be a boost for the school as well.

One Eighty had already completed a house in the Madison neighborhood – for a family whose son attends Madison. They moved in more than a year ago, and One Eighty was ready to move on to completing a second house. One Eighty’s job training program rehabs homes to help train its clients for the workforce. The organization also understands the benefits of home ownership for families and neighborhoods, so they started a home ownership course.

Meanwhile, St. Paul people read Evicted, a book about the impact that not having a permanent place to call home can have on adults and children. Out of that, St. Paul’s mission board also knew it wanted to do something to increase the number of affordable homes available in the neighborhood, and decrease the stock of abandoned houses at the same time.

“The appeal of this partnership was that we had the opportunity to make meaningful change without having to recreate the wheel, working alongside an organization that is well versed in creating affordable housing opportunities and providing the services needed to make it a success,” said Angie Vaaler, St. Paul social worker/counselor. “This match was made all the better in that we are able to continue our partnership with Madison Elementary School in yet another way, by making affordable housing and home ownership a reality for some of its families and improving the surrounding neighborhood.”

St. Paul gave One Eighty a $43,000 gift to acquire and rehabilitate a home. Additional money was set aside as contingency for this project – and with hope for a second house. Margaret and Ryan will rent the house from One Eighty at first. Once they complete the homeowner program through One Eighty, they will become the owners.

“Every time I meet with somebody through One Eighty or the church – it’s nothing but good, positive feelings and vibes,” Margaret said. “It’s so uplifting. I feel very, very, very blessed. It’s emotional for me. I just really love what everybody is doing. It’s so inspiring for us.

A place to call home
Since she was a child, Margaret has never lived in the same place for more than two or three years, she said. Margaret is studying nursing at Scott Community College, Ryan works at Menards.

In partnership with staff at Madison, Margaret’s family was chosen because of, among other reasons, how they are consistently involved in each other’s lives. “Even just being picked was a huge shock for me. I’ll be able to actually call a place home,” Margaret said. “It will be something I can put my own touch on. That’s the biggest part for me.” Now with one house nearly done, St. Paul and One Eighty are looking toward a second home.

“Our faith tells us that what has the appearance of death or destruction, with God’s help has the potential to be turned into life and new beginnings,” Pastor Katy said. “I look forward to further projects together. Our hope is to purchase another house to renovate and restore within the next several months, working with Madison staff to identify a family who would benefit from such an opportunity. Wouldn’t it be amazing if this project could be replicated over and over again in the coming years? Imagine the impact!”

Beyond this first house
This affordable housing partnership:
▶ has the propensity to affect not just the parents and children of this family, but generations to come by providing an opportunity to move beyond a cycle of poverty or instability of high-cost, insecure rentals to the stable environment of home ownership
▶ creates an environment to foster investment in one’s community and turn neighborhoods around
▶ provides the opportunity to rehab more houses for more families in the future

4 Comments on “Abandoned no more”